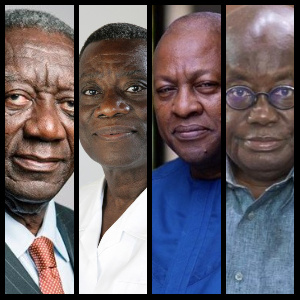 What Ghana’s presidents have all said about the LGBTQ+ subject

Jerry John Rawlings and John Evans Atta Millsmay no longer be alive but their words on many subjects including this growing, resurfaced subject of the rights or otherwise of the Lesbian, Gay, Bisexual, Transgender, and Queer Intersex Rights (LGBTQ+) sexual orientation are there to refer to.

In the case of the late former President Flt. Lt. Jerry John Rawlings, while there is no definite public reference to what he said on the subject, all other presidents within the Fourth Republic of Ghana have had a thing or two to say.

Recently, the conversations on the rights of persons of the LGBTQ+ community in Ghana have resurfaced mainly after news broke of the opening of a new office for persons of this sexual orientation in Accra.

In each of these instances, the ministers-designate all re-emphasized the stance of Ghana’s laws on the practice, albeit not definite, drawing in the defenses of how our culture and values as a people frown on them.

Like a raging fire, social media has been riddled with discussions on the subject, topping trends, and people who support the act are coming out, alike those who disagree with the act, boldly stating so.

He added that the promotion of same-sex marriages is unnatural and immoral behavior in Ghana and Africa at large, and is totally unnecessary and dangerous because humanity could not continue if such acts were condoned.

“No one was born gay, people just want to convince us to accept this blatant lie, but let us show them that we are real Africans, we cannot fight against nature and win. We will not conform to such disgraceful activities, even in Europe, majority of the people do not encourage homosexuality. As long as they remain in the minority, let us keep pushing till they accept that LGBT is not right and persons who identify as such, rather need some kind of help instead of forcing it on Africans.”

In an interaction with the media during his presidency, and in reaction to comments by then British Premier David Cameron that they may consider cutting aid to Ghana should the country not legalize gay rights, the late former president was forthright, ruling out any possibility of the legalization of same.

“I, as president of this nation, will never initiate or support any attempts to legalize homosexuality in Ghana. As a government, we will adhere by the principles enshrined in our constitution which is supreme. Let me also say, that while we acknowledge all the financial assistance and all the aid which have been given to us by our development partners, we will not accept any aid with strings attached if that aid will not inure to our interest or the implementation or the utilization of that aid with strings attached would rather worsen our plight as a nation, or, destroy the very society we want to use the money to improve,” he said.

Incumbent president, Nana Addo Dankwa Akufo- Addo, in an interview with Gulf news channel, Al Jazeera, said the issue of same-sex relationships was not on the agenda of the country although he believes that its snowball effect will soon reach Africa.

“At the moment, I don’t feel and I don’t see that in Ghana there is that strong current of opinion that is saying that this is something that we need even deal with. It is not so far a matter which is on the agenda.

“I don’t believe that in Ghana so far, a sufficiently strong coalition has emerged which is having that impact of public opinion that will say, change it; let’s then have a new paradigm in Ghana,” he said.