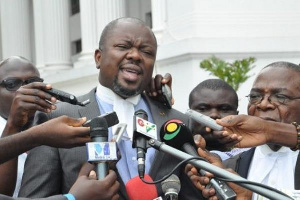 There was a near scuffle between members of the National Democratic Congress legal team and officials of the Criminal Investigations Department on Monday.

The scuffle ensued when the police wanted to detain Oheneba Boamah Bennie for allegedly threatening the life of President Nana Addo Dankwa Akufo-Addo.

The NDC team made up of Victor Kojogah Adawuda, Francis Xavier Sosu, and Dr Basit Bamba according to the Daily Graphic had series of confrontations with the police officers over their invitation and the decision to detain the radio presenter for further investigations.

It was during one of such confrontations that Lawyer Adawuda issued a threat to the police officers saying “you have families, you have wives, you have children, we know where they are so do it well.”

The lawyers insisted on knowing where the police intended on keeping their client and requested for bail which was denied by the police.

At this point, lawyer Adawuda was said to be throwing tantrums at the car park of the CID headquarters and even announced that he was ready to die at the scene.

In a cynical act, Lawyer Sosu who is an MP-elect for Madina Constituency said the police were going to ‘kill’ the suspect if they send him away.

Lawyer Sosu directed the suspect not to sit in the car that was supposed to transfer him for detention if the police were not going to disclose where exactly they were taking him.

Lawyer Sosu at a point is said to have attempted to join his client in the police car but was stopped by the police.

The team then resorted to an attempt to follow the police car taking the suspect away but were left stranded for a while as the police locked the main entrance to the headquarters.

The suspect before being taken away had the explicit instructions of his lawyers not to utter any word. However, when he was brought out from the conference room to the vehicle to be transported for detention, he started raining curses on those he said recorded the video that has landed him in trouble with the police.

Lawyer Adewuda later stated that “they showed us a video and audio. Our client confirmed he was the one. Now they are saying he would not be granted bail, therefore they are sending him to the Central Police Station. The police initially said they will not tell us where they were sending him to.”

Oheneba Boamah Bennie, who is a presenter with a pro-NDC radio station based in Accra, Power FM, was invited by the CID because according to them he posted a video on December 10 at about 12:54 pm, in which he was heard insulting and issuing threats on the life of President Akufo-Addo.

He has been cautioned on the offences of offensive conduct conducive to the breaches of peace and publication of false news contrary to Section 207 and 208 (1) respectively of the Criminal and Other Offences Act, Act 29/60.

At the time he reported to the CID head office and throughout his interrogation, some NDC supporters had massed up in front of the CID Headquarters bus stop to show solidarity to the suspect.

Lawyer Adawuda upon the indication by the police to transfer the suspect told the supporters to march to the Accra Central Police Station which they did on foot as directed.

The team of lawyers then sat in their luxurious cars and left the scene.