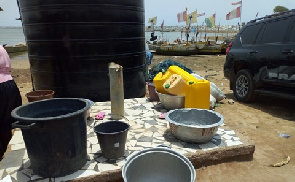 Residents of Sekondi Takoradi have been battling against an acute water shortage for nearly two weeks.

The shortage has badly affected homes and several educational institutions and businesses. While some areas have no water running through their taps, others have seen intermittent flows.

Residents in the most affected areas have been roaming around with their gallons, buckets, rubber bowls and other containers in search of water for their daily chores.

They lamented that the situation was affecting their operations since they had to walk for long distances to fetch water for domestic and commercial activities.

Some of the affected areas are Assakae, Chapel Hill, New Takoradi, Bankyease and Windy Ridge Extension.

They have, therefore, appealed to the management of the Ghana Water Company Limited (GWCL) to have the problem rectified.

Making the appeal, Madam Comfort Arthur, a resident of Assakae, noted that commercial users were mostly affected and compelled to rely on tanker and other water supply services, saying the situation had adversely affected economic activities.

Miss Ramat Mohammed, a student of Takoradi Technical Institute, indicated that after classes, she and her other colleagues had to walk long hours and join long queues for water for their activities.

The Communications Manager of the GWCL in the region, Nana Yaw Barnie, explained that during the harmattan period, the company was forced to roll out a water rationing programme to balance off the effect across the city.

He indicated that the GWCL’s pump station at Effia was unable to receive adequate levels of water from their treatment sites, to be distributed to the affected areas.

“That is true; we are unable to receive adequate levels at our reservoir at Effia to the point where there will be enough pressure to push the water to those affected areas. But I assure you that it will soon be rectified”, he added.