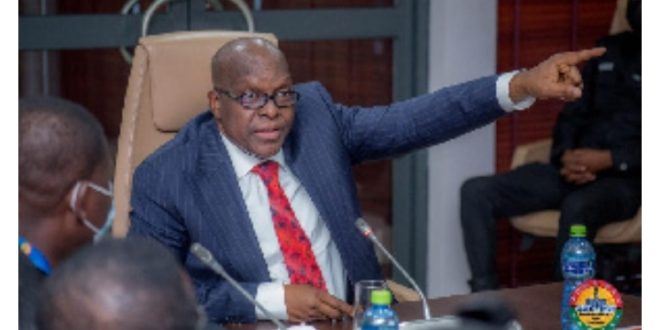 WATCH: How Bagbin urged MPs to go to court over Deputy Speakers’ voting rights on Feb. 15

Majority and presidency celebrate vote as victory for democracy

On February 15, 2022; Speaker of Parliament Alban Bagbin returned to the House after a medical checkup in the United Arab Emirates.

He left Accra for Dubai on January 29 and was back to preside over sittings. When he arrived in the chamber and after the prayer session, he got down to business.

Bagbin read two belated pieces of communication from the presidency relative to travels by Nana Addo Dankwa Akufo-Addo informing him (the House for that matter) about travels to Ethiopia for the Ordinary Session of the African Union and a 10-day official trip across Europe and to Guyana.

Bagbin then proceeded to explain why there was the need to streamline channels of communication especially from the Presidency to the House and vice versa.

It brought him to a topical point at the time relative to whether or not Deputy Speakers should have voting rights. He urged MPs to work at seeking interpretation of existing rules from the courts.

“So, I would want to urge you all to still continue to maintain cool-heads. Let us think through these matters together and find solutions to some of the conceptual challenges that the Constitution has imposed on the country,” he stated.

What Bagbin said in full:

“In view of the fact that there are issues about Deputy Speaker, whether he is acting Speaker, his right to vote or not to vote. I am happy that some Members of Parliament are involved in trying to get clarification on these constitutional matters from the courts.

“Some of you have proceeded by issuing original writs at the courts for interpretation; they are welcoming developments because at the end of the day, we will be guided on these matters.

“These are new grounds, and this is the time for us to learn and improve on our system. So, I would want to urge you all to still continue to maintain cool-heads.

Let us think through these matters together and find solutions to some of the conceptual challenges that the Constitution has imposed on the country.”

Watch his presentation below between 13:40 seconds – 15 minutes mark

The Speaker of Parliament, Alban Bagbin, on March 11, 2022 issued a statement reacting to the two other arms of government – the Judiciary (via the Supreme Court) and to the Executive (specifically President Nana Addo Dankwa Akufo-Addo).

Bagbin’s statement was released via Parliament’s official Facebook page 48 hours after the Supreme Court handed down a landmark ruling on the voting rights of Deputy Speakers of Parliament.

It also came barely 24 hours after President Akufo-Addo had formally commented on the ruling that said Deputy Speakers could vote and form part of quorum for business in the House.

The ruling also struck out a portion of Parliament’s Standing Orders that barred Deputy Speakers from voting.

The Speaker suggested that he would ordinarily had stayed off commenting on the issue but for Akufo-Addo’s comment where he specifically said Parliament was not above the law and should not act as such.

“I have resisted the temptation of making a comment on the judgment of the Supreme Court on the issue of the voting rights of Deputy Speakers when presiding. But the unfortunate and myopic comment of the President has compelled me to let it out,” the statement read.

Scathing opinion on the verdict

Among others, Bagbin used words like absurd, reckless, troubling to describe the verdict of the Justice Jones Dotse-led bench.

“The SC decision, is to say the least, not only an absurdity but a reckless incursion into the remit of Parliament. The trend of unanimity is equally troubling. It doesn’t help explore and expand our legal jurisprudence,” the statement observed.

Read the full ruling of the Supreme Court below:

Previous Today at the news stands – March 14, 2022
Next Passengers injured in accident on Bimbilla-Yendi road