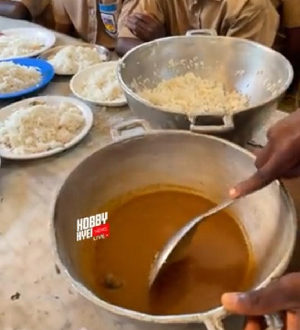 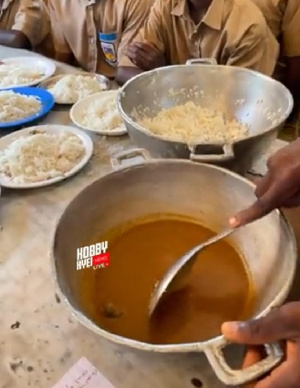 GhanaWeb has sighted a video shared by blogger Kobby Kyei, in which students of St Paul’s Senior High School and Minor Seminary in the Volta Region are purportedly sharing one fish during dining.

The video, which has since gone viral on social media, particularly Twitter, has had people express horror at the feeding situation in schools.

In the said video, a student with a spoon is seen carefully dividing the fish in what looks like palm nut soup into several pieces to share with other students seated around the table who had been served rice.

“This is not healthy,” Kobby Kyei wrote while tagging the Ghana Education Service on Twitter.

It will be recalled that from May this year, some Senior High Schools reported food shortages while threatening to close down if nothing was done about the situation.

The regional Conference of Heads of Assisted Secondary Schools (CHASS) in the Northern, Eastern, Central and Volta regions were worst affected by the crisis and demanded that either students are made to feed themselves, or the schools shut down.

However, government intervened and had supplies delivered to the various schools to avert their closure.

The situation seems to have resurrected in some schools in the Volta region as letters shared by Deputy Ranking Member on Parliament’s Education Committee, Dr. Clement Apaak, shows a request by school heads for supplies.

The headmistress of Avatime Senior High School, Rebecca Mawusi Veny, wrote to the Volta Regional Director of Education to request permission for the students to begin feeding themselves as the school was running out of stock.

“This unfortunate situation has been reported to the regional Buffer Stock Company and other officers that matter, but the situation has remained the same.

“Director and Board of Directors, please I seek permission for my students to buy their own food come next week if nothing is done about the food situation,” part of the letter dated September 29 read.

Similarly, the headmaster of Alavanyo Senior High Technical, Rev Samuel Pius Elewokor, wrote to the Volta Regional Free SHS Secretariat for urgent supply as they have resorted to feeding their students twice daily.

“We hope our request would be given a quick response because we currently feed the students with only breakfast and supper, and this can take us to Friday, September 30 2022,” part of the letter read.