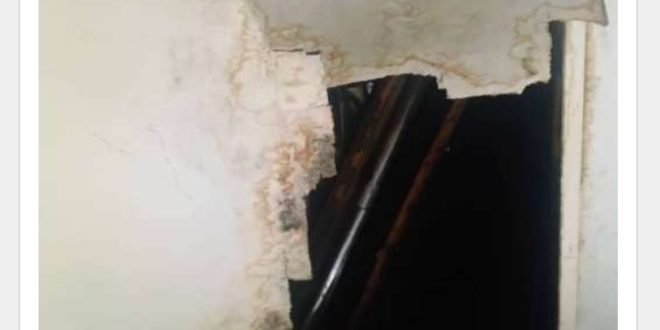 Share
It is so painful when those given the opportunity to serve sit adamant in their free paid air-conditioned office and careless about the things that benefit the ordinary people.

The video below is evidence of what is going on in the Bongo District of the Upper East Region. It was taken since last year and as we speak, the challenge still persists.

This is exactly the current state of a place we call a district library, I mean a library for a whole Bongo district, where students are supposed to be reading and learning.

The Assistant Librarian at the Bongo District Library Mr. Felix Ayane said he started raising concerns since 2015 to get the assembly to renovate the library but all efforts have not yielded any fruitful results. “We have written letters upon letters but nothing is being done to salvage the situation. The former DCE Peter Ayimbasa told us in 2019 that they were mobilizing funds to work on the library but nothing happened until COVID came in and then the election period also came in to worsen the situation,” he noted.

Sharing his terrible experience, Mr. Felix noted that, “When rain falls and you are inside it, the library also rains on you”.

Giving a brief history of the library, the District Librarian Mr. Atolpae Roger noted that the Bongo District Library was established in November 1994 but was officially commissioned in the year 1995.

He added that it was first located at the Assembly in a mud structure before it was later relocated to its current location on 31st May 2008 when its capacity could no longer contain the number of visitors at that time.

The Assistant librarian stressed, “It is not easy sitting in a facility to work and you cannot boast of that facility as a government facility. This is very ridiculous, that in Bongo, we have all the big names serving under this current NPP government in both local and national and even others doing very well in opposition but does not care for some of these minor and important social amenities for the ordinary people who normally gave them the mandate to serve.”

Mr. Felix emphasised that they have been trying very hard to meet with the current District Chief Executive (DCE) Madam Rita Atanga but all attempts have not yet succeeded. “Why must it be so? Is the DCE not appointed by President to serve the people? Why must it be difficult for those in charge of the library to gain access to the DCE if indeed he or she represents the people? The people of Bongo, please this demands urgent attention.”

Previous 65 years of persistent uptick in road carnage: ‘Did we go or did we come’
Next Don’t insult our intelligence – Local Governance expert slams Samira Bawumia