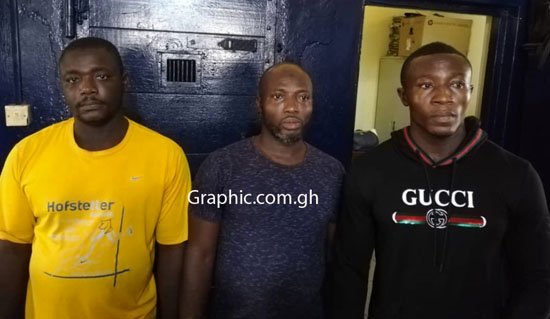 Three suspects who were included in a list of 12 people wanted over the shooting incident at the opposition NDC’s office in the Ashanti regional capital, Kumasi, have surrendered to the police.

He said his clients have no knowledge of the crime they are being accused of and have only reported themselves in order to assist the police in their investigations.

Their statements have been taken and the police have been with them to the crime scene to conduct an assessment and take their account.

They have, however, been remanded in police custody as a planned court appearance could not come on but their lawyer hopes, that should happen on Monday.

ASP Ahianyo said the suspects are “strongly advised to report in their own interest.”

One person was shot dead at the Ashanti Regional Office of the NDC on February 18 where the leadership of the party had gathered to plan the just ended presidential primaries.

One other person sustained gunshot wounds and is responding to treatment at the Komfo Anokye Teaching Hospital in Kumasi.

The incident happened during an altercation between at least one of the victims and the shooter.

According to an eye witness, the assailant, associated with an NDC militia, the Hawks, shot an NDC man thrice. First in the leg while he run and twice in the chest at close range as he lay vulnerable.

A statement from the party confirmed the shooting and the death and the party’s General Secretary tasked the police to investigate the matter and have the perpetrators punished.

Johnson Asiedu Nketia says the party will shield no wrongdoer.