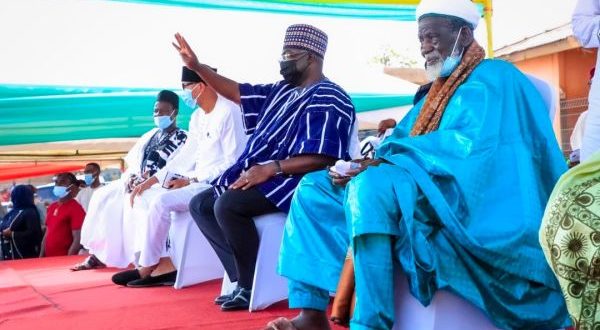 The sports complex, funded by the Zongo Development Fund, saw the complete transformation of the old New Fadama Park, and it has been named after the National Chief Imam, an illustrious son of the community.

Addressing zongo chiefs, Imams and thousands of people during the commissioning, Vice President Bawumia said the complex was constructed and named ofter the Chief Imam in fulfillment of a promise to him by President Akufo-Addo on the occasion of his 99th birthday in 2018.

“This gathering is a culmination of a noble gesture by President Akufo-Addo in April 2018, on the occasion of the 99th birthday anniversary of our father, Sheikh Osman Nuhu Sharubutu, to build an ultra-modern sports complex for the youth of New Fadama and name the facility after the National Chief Imam, a true icon of our nation,” Dr. Bawumia said.

“Transforming this popular football park into an ultra-modern edifice for the football-crazy youth of New Fadama and its environs, is as apt as naming the facility after the most iconic member of this community, and one of the greatest statesmen this country has produced, Dr. Sheikh Osman Nuhu Sharubutu.”

Dr. Bawumia explained that President Akufo-Addo, as a former footballer in his youthful days, recognises Zongos as a hub for football talents, hence his government’s decision to invest in the privision of modern football parks and stadia to help unearth, nurture and promote more talents in Zongo communities.

“Historically, Zongos have produced some if the nation’s finest footballers like Baba Yara, Mohammed Polo, Sulley Muntari, etc. and it is our vision to help unearth more of such talents in the Zongis that is why we are investing in these sports complexes.”

The Vice President stated that the transformation of the previously grassless and dusty Fadama Park into an ultra-modern complex for the youth of Fadama, is part of the broader vision of President Akufo-Addo to prioritise and accelerate the development of Zongos, using the Ministry of Zongo and Inner Cities Development and the Zongo Development Fund as vehicles.

“The Zongo Development Fund has supported the building and rehabilitation of access roads, bridges, drainage systems, clinics, chip compounds, toilets and water systems in many Zongo communities in all sixteen regions.”

Dr. Bawumia also highlighted the Akufo-Addo government’s investment in education in zongo communities such as building of classroom blocks, providing tertiary grants to needy students and awarding scholarships to 40 students from Zongo to study medicine in Cuba on government scholarship.

Previous US election 2020: Biden unveils team to ‘make us proud to be American’
Next Give me victory in December – Akufo-Addo appeals to Ghanaians