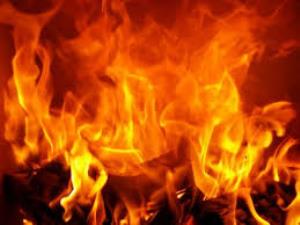 The Nkwanta District Educational office of the Volta region has been consumed by fire today Sunday, February 10, 2019.

According to reports by Peace FM, the fire started from a container outside the GES office which contained car spare parts belonging to workers at the office.

The fire service got to the scene on time but had inadequate equipment to fight the fire.

Reports say the only fire tender they had, had broken down and has been at a service shop in Ho for over three months now.

The fire officials at the Nkwanta South District revealed that the issue has been reported to the District Assembly and the Regional Office.

They said as it stands, nothing has still been done about it. They are therefore appealing to the National Headquarters in Accra to come to their aid.