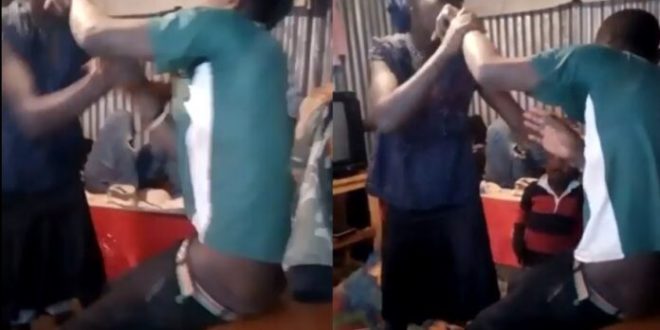 VIDEO: Wife Beats Husband In Front Of Their Kids After Refusing To Pay Rent And Buy Food

A viral video making rounds on social media which have gotten people talking has revealed moments a wife was seen beating the hell out of his husband for not being able to provide for the family ie paying of fees and also providing food on the table.

The woman whose identity is yet to be revealed was seen giving some hot slaps to his husband in front on their kids as the man sat down like a toddler and received the slaps gently like a gentleman.

The video upon getting to the internet has gotten a lot of comments with many people calling the woman a very bad and evil person for beating his husband inform[nt of their kids whiles some have also revealed that the young man deserves all the slap for not been able to provide for his family.