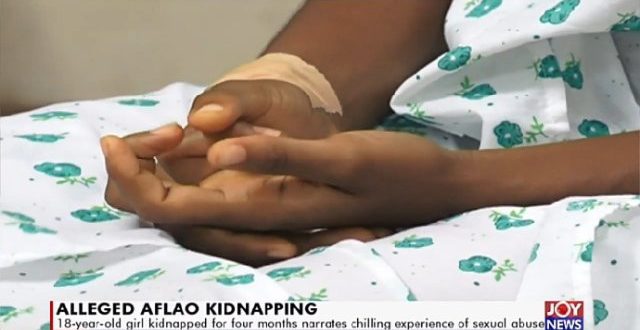 Two self-styled pastors, George Andrews and Maxwell Peter, will be put before the Keta Circuit Court Monday, for allegedly kidnapping and raping an 18-year-old woman.

Precious, not her real name, is battling scars from a four-month tortuous kidnapping and multiple rape experience at the hands of the two pastors.

She was kidnapped in April 2019 at Aflao in the Volta region by two men who sought refuge in her mother’s home.

Precious said she was sexually abused nearly every day while in captivity for four months. But that was not all.

Her captors compelled her to take concoctions to abort the pregnancy that resulted from the multiple sexual assaults.

JoyNews’ Komla Adom and Ivy Setordji report that the two men who posed as destitute pastors on a mission from Nigeria, baited her with a snack.

“I woke up in a pool of my own blood from my genitalia,” this is all she could remember after having a drink they offered her.

As if that was not enough, Precious spent the next four months as a sex object for the two men.

“They had sex with me every day and even when I resisted, I was strangled,” she recounted amidst tears.

After weeks of being held, and abused, she got pregnant.

George and Maxwell transported her between Nigeria, Togo and Ghana demanding ransom from her parents to facilitate her release.

Frantic searches in Ghana, Togo and Nigeria on the direction of the two men, did not yield any results.

According to her foster father, Dr Richard Mettle Nunoo, a collaboration with some young people in Aflao, Ghana’s southern border town with Togo, led to the rescue of the girl from a hideout.

Several hospital visits from Akatsi, to Korle Bu in Accra reveal, she had severe lacerations in her private part.

“I don’t want to go through this again…I want justice,” she blurted out.