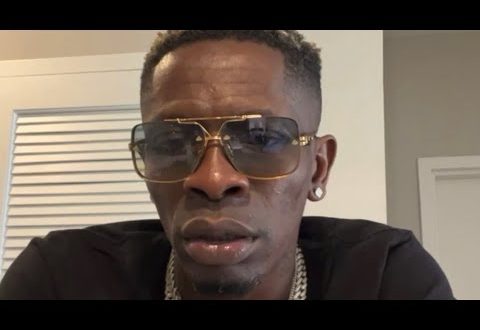 VIDEO: Shatta Wale narrates how his mother bolted from home and never returned

Dancehall musician, Shatta Wale, has recounted a period when his mother, Ms. Elsie Avemegah, left home and abandoned his father.

Recalling the encounter which he has described as painful, Shatta established that his mother left during his first year in Senior Secondary School.

The SM boss, while admitting that he is from a broken home, said his he took the bold decision at a point when his father wanted the entire family to relocate to the United States.

He added that all efforts by his father to get his wife back at that time proved futile.

Shatta Wale made these statements in a bid to pay tribute to his stepmother who reportedly passed away on Wednesday, March 16, 2022.

“I’m from a broken home. My mother left my father sometime ago when we were young. When I was SHS1, we used to study 13 subjects and I didn’t have the mind for that. I hated it because my brain isn’t a factory. So I told my father and he wanted all of us to relocate to the states, Miami to be precise. He had a contract there and wanted all of us to move and settle there. My mother left my father. She left my father. She ditched and left all of that opportunity. She run from home and left us. My father tried and tried to get her back, God is our witness,” he stated in a Facebook live video.

Also, addressing claims that he has deserted his biological mother for the third time, Shatta Wale said;

“I support my father, mother and every other person around me. People are not grateful that’s why.”

Shatta Wale’s biological mother, Ms. Elsie Avemegah, vented out her frustration in a series of radio interviews after claims of being kicked out of her rented East Legon apartment in which she lived for six years.

In a number of revelations, Shatta’s mother disclosed that she was abruptly kicked out of the apartment her son presented to her as her own.

Ms. Avemegah said she was thrown out because one day the landlord resurfaced and claimed that the rent has expired.

Shatta Wale’s mother who claimed to be currently residing in a bush around Kasoa said all efforts to reach her son has proved futile.

“How can an old woman like me, over 60-years-old woman be roaming about the streets with polythene looking for a place to sleep? If night falls I become worried because there is no place for me to sleep. Anyone feeding my son with bad counsel should stop because I am really suffering. For three weeks I have been in a mess.

“The security prevented me from entering the house. Those around him feeding his mind with lies should stop it. I haven’t done anything to Shatta to deserve this treatment. I am really hungry. Currently, I am living in a bush around Kasoa. For the past five years, I haven’t set my eyes on my son,” she earlier stated.

Previous How I slept with my baby daddy in a hospital ward – Ghanaian lady bares it all
Next Eat lettuce, carrot, cucumber to replace bleaching