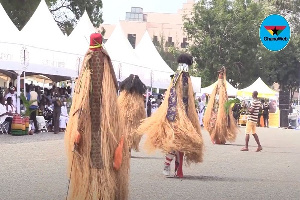 Even though it is a period of mourning for the Rawlings and Agbotui families, the African culture permits some level of dancing, drumming and other ways of expressing grief.

A blend of the rich Ghanaian culture and that of neighbouring Nigeria were put on display at the burial service of the late Victoria Agbotui, mother of former president Jerry John Rawlings.

There were amongst other things masquerade dancing, a rare symbolic dance and display by the Ashanti chiefs who represented Otumfuo Osei Tutu II.

Most of the performances were either in preparation to welcome dignitaries or symbolised the sentiments of the grieving families or guests.

The service which took place at the forecourt of the State House also saw massive convergence of persons at the top echelons of current and previous governments, as well as, traditional leaders.