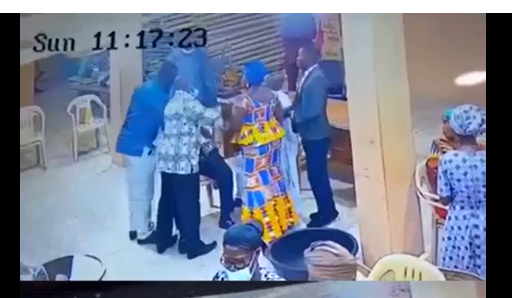 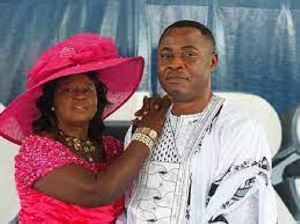 CCTV footage of the service held at the Kasoa headquarters of the church on Sunday shows the wife of Reverend Anthony Kwadwo Boakye – the church’s founder- assaulting some church leaders.

According to reports, Mrs Boakye was livid about the church leaders sitting close to the area where some designated members of the church were counting monies offered during church service.

The money which was being counted was meant for the purchase of a “white car” for Reverend Boakye, who now preaches to his church virtually from a remote location.

Reverend Boakye, who is recovering from a long sickness, recently told his church members that God has directed him to buy a white car and therefore urged his members to contribute towards the purchase of the car.

The church members on Sunday conducted a special offering for the purchase of the car; however, counting the money resulted in an altercation between the church leaders and the founder’s wife.

The CCTV footage shows Mrs Boakye moving to the area where the money was being counted to confront some men who are reportedly church leaders.

A brother of Mrs Boakye, Reverend Johnson Kwasi Asare, in an interview with Ekuonaba TV, explained the circumstance of the quarrel.

While condemning his sister’s actions, Reverend Asare explained that the entire episode was set up by a cartel of church leaders to disgrace his sister.

“It is a cartel in the church made up of Church Father Mr Yeboah, Elder Boat and others. I have said before that it is all about money. The church leaders met with Bishop (Anthony Boakye) and some lawyers; they agreed to designate 12 people to count the church monies. The pastor’s wife and church leaders are not supposed to go anywhere close to where the money is counted.

“I believe my sister overreacted. But the agreement is there. The agreement was that the pastor’s wife, the church leaders and all the stakeholders would designate a representative to join the counting, and that is what has been in place for a while. But on Sunday, the pastor’s wife learnt that the church leaders who are seeking to squander the money had gone to sit where the counting was being done, and that was what prompted her to confront them,” he explained.

Reverend Asare alleged that there has been a successful effort by the church’s leaders to turn his brother-in-law (Reverend Boakye) against his sister (Mrs Boakye). He noted that his sister has not met or seen her husband for nine months due to the machinations of the church leaders.

He stated that his sister, despite her contributions to the church’s success, has been maligned by her husband and the church leaders with frivolous allegations. According to Reverend Asare, he has since advised his sister to leave the church.