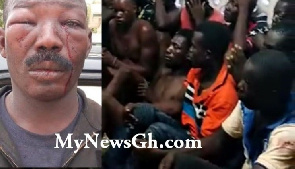 VIDEO: Over 20 persons arrested for brutalizing policeman at Amasaman

Over 20 , mostly youth of Amasaman, a suburb of Accra, who assaulted Sergeant Atta Mahama SWAT Unit of the Ghana Police Service have been arrested.

The suspects who are currently undergoing screening according to checks by MyNewsGh.com, were arrested at various locations on Monday night in Ga West Municipal District in the Greater Accra Region.

A video went viral revealing how angry residents subjected the uniformed policeman to severe beatings leaving him with various degrees of injuries and a swollen face over what is yet to be ascertained.

According to a section of residents, the helpless officer was rescued by some elders of the community as the youth including women were pummeling him with life-threatening objects which left him bleeding from the nose.

The Amasaman Divisional Police Command has revealed that suspects after the screening would be arraigned before court and charged for various offences condemning the upsurge in police brutality in recent times.

It would be recalled that in March this year, a video has gone viral on social media in which an angry mob descended on a policeman subjecting him to severe punches in similar fashion.

In the said video, the policeman in a helmet was seen in the less than one-minute exchanging blows with his attackers who were punching him as he tried to defend himself with the voice of bystanders asking persons trying to separate the fight to allow the law enforcer to receive some sound beatings.

“Allow them to beat him,” the voice is heard saying in the background.