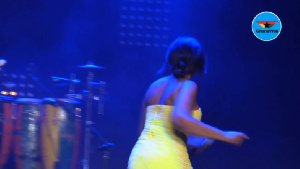 Singer, entrepreneur and baby mama of Shatta Wale, Diamond Michelle Gbagonah, known in showbiz circles as Michy hurriedly left the stage with amusement when host of MTN Music Festival – Farmers’ Day edition – Mercury Quaye asked her about the father of her son.

Michy, a surprise act on the night, performed ‘Low Tempo, a song she recorded with Shatta Wale when they were happily together.

In the absence of the dancehall artiste, the host joined Michy as a hypeman while she performed in a yellow outfit.

Midway through her performance, interactions began. At the behest of the host, the audience cheered Shatta Wale’s signature but Michy refused to do same. Instead of ‘Paah paah paah’, she responded ‘kiii kiii kiii’ and laughed out loud.

“Thank you very much Michy for joining us. How is Shatta Wale,” asked the host – a question Michy refused to answer.

What was more interesting was the fact that she looked around like someone seeking refuge after being given a hot chase and left the stage.

Shatta Wale pulled off a surprise at the launch of his third album, ‘Reign’ at the Fantasy Dome, when he went down on his knees to propose to his then longtime girlfriend, then known as Shatta Michy. Months after their relationship soiled, Michy disclosed it was staged.

The MTN Music Festival is organized in partnership with Slip Entertainment and it’s held as a prelude to key national holidays including the Independence Day and May Day celebrations.

Previous Ahafo Regional Minister Congratulates National Best Farmer
Next Man, 35, beats wife after catching her having sex with another man