Home / CRIME & PUNISHMENT / VIDEO: Man arrested for contracting robbers to attack his father who has returned from abroad 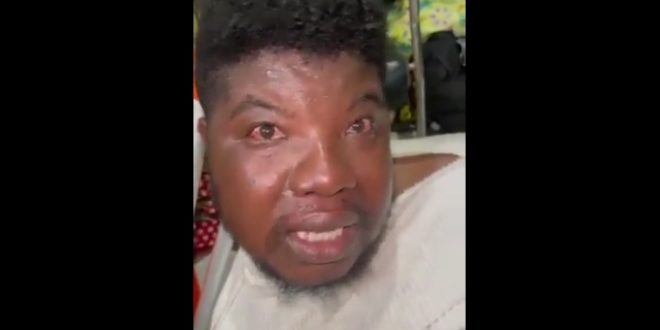 VIDEO: Man arrested for contracting robbers to attack his father who has returned from abroad

Man confesses to contracting robbers to attack his father

A 30-year-old ride hailing driver, Stephen Gyedu has reportedly been arrested for contracting a gang of robbers to attack his own father.

A video of the suspect being interrogated by security officers has gone viral on social media.

Admitting to the plot to rob his father who had recently arrived in the country from abroad, Stephen said the idea was initially sold to him by a church colleague.

In another video which has also gone viral, the suspect is heard conspiring with some of the supposed armed robbers on the attack to be staged on his father who had bought him a Daewoo Matiz car for his work as a commercial driver.

“He is my friend at church, Leading Star Chapel International at Nsawam,” he said.

Adding, “I had a conversation with him and he suggested I am the cause of my hardships because I shouldn’t be going through hardship when my father is back from abroad with money. Why should I be claiming holy and not find a means to take some of the money. That was what got into my head because of the little hardship I was going through,” he told the interrogators.

During the conversation with the supposed robbers, Gyadu is also heard giving directions to his father’s house where is also a resident and how they should go about the operation.

“Tell us everything including exactly where the money is hidden. We wouldn’t want to talk to you when we come. We might even have to assault you a little, so give us the relevant information now,” the supposed robber is heard directing the suspect in a voice recording.

Gyedu who seemed bent on carrying out the plan replied stating, “I sleep in the same room with my father. We have rented out other parts of the house. But in the night, everyone is usually in their room. Nobody comes out. It is a story building and we are on the top floor while the tenants occupy the down floor”.

Stephen Gyedu among other details gave the location of his father’s house at Lomnava around Abeka-Lapaz and further made arrangements to meet up with the robbers while assuring that he is willing to agree to a good percentage for their role.