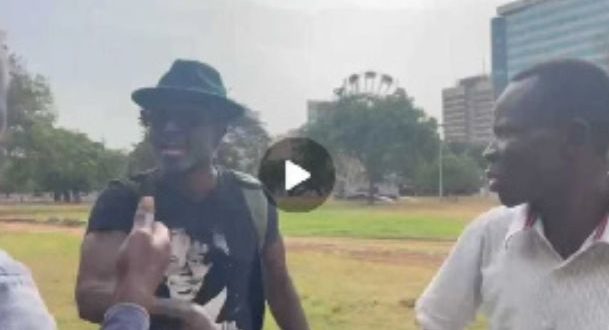 Legendary Ghanaian rapper, Reggie Rockstone has alleged that the Afua Sutherland Children’s Park in Accra has either been sold or is being sold to a private developer.

According to Reggie, a daughter of the renowned playwright who the park is named after, Esi Sutherland-Addy, contacted him to come on board a campaign to raise funds for the renovation of the park which has been left in ruins for years.

As part of their efforts, Reggie Rockstone and his wife, Zilla Limman went to the Afia Sutherland Park to shoot an endorsement video.

However, upon their arrival at the park, Rockstone and his wife were confronted by a group of hostile men who claimed to be security guards at the abandoned children’s park.

The supposed security guards prevented the couple from filming at the park and snatched Zilla’s phone which she was using to film the confrontation that ensued.

Reggie Rockstone has been describing the context in which the men accosted him and his wife and attempted to take her phone away as an “assault.”

“Some greedy folks are trying to buy the property. And rumors here say the property has already been bought, so these guys are acting like land guards,” the rapper is quoted by Pulse to have alleged.

Throughout the video of the encounter between the couple and the supposed security personnel, the men failed to properly identify themselves and failed to honour several requests to show their ID cards.

According to Reggie, the so-called security guards have been preventing people from filming the park for some time now, and have been confrontative towards individuals who attempt to access the park.

“My wife has take-up the issue seriously. If you think about it if she was alone can you imagine what they would have done to her?” Reggie questioned the actions of the men on his wife.

The Afua Sutherland Children’s Park located in the heart of Accra in the past served as one of the fun-filled centers in the country.

From regular weekday events to weekend recreational activities, the now dilapidated children’s park served a very crucial role in the socialization life of most Ghanaians.

Speaking of his times at the park, Reggie Rockstone said, “I have performed at that park. Some of the biggest hiplife concerts were on that park. When I was a child, the place was well furnished.”

Of what has now become the once lively park, the man credited with founding rap music in Ghana said “the place is full of junkies and it’s messed up. On top of that, it seems they are trying to sell it or it has been sold. Ghanaians really need to be vigilant.”

Previous WATCH: Learning about beautiful artifacts made from clay in Ghana
Next Lady who resurrected after doctors pronounced her dead has died again