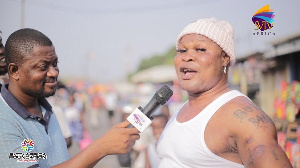 VIDEO: I was not sacked – Bukom Banku opens up on GHOne exit

Boxer and entertainer Braimah Kamoko popularly known as Bukom Banku has confirmed his exit from GHOne.

Earlier this week, EIB released a statement confirming that it has parted company with Bukom Banku and subsequently scrapped the Bukom Banku Live show.

The media house explained that the show has served it purpose and will not be airing in 2021.

“Bukom Banku and management of GHOne TV wish to express our sincerest gratitude to cherished viewers and sponsors of the show and the general public.

“The show will not be returning to your screens this January having served the purpose for which it was created during the political campaign season”.

“In its short life span, the show built an ardent following and made a considerable impact in a number of slum communities. We are grateful for the show of love and support. Watch out for a blockbuster. Season’s greetings”, the statement read.

Speaking to DJ Nyaami on SVTV Africa, Bukom Banku clarified that he was not sacked as being reported.

He stated that he signed a lucrative four-month deal with the company and it expired in December.

He stated that he made a huge amount of money from the deal and will always be grateful to the media house.

”It was a four-month contract and it has ended. I was not sacked as people are saying. The show was to release tension before and during the elections,” Bukom said.

”My mother (Nana Aba) and father (Bola Ray) are at GhOne and I love them. So I will go back if they call me, ” he added.

Bukom hinted that he will be working with TV7 soon, however, if GhOne wants him back he will gladly leave TV7

Previous Fire Service shuts down electronics shops in Ho and Sogakope
Next Those who think Akufo-Addo will die soon, will be shamed – Prophet