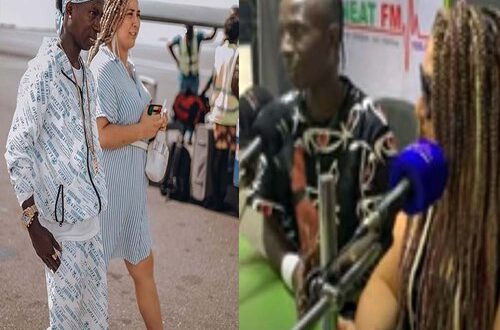 VIDEO: I love Patapaa’s D**k And How He Respects Me – Wife of Patapaa Say As They kiss On Neat FM

According to Liha Miller during an interview with Ola Michael on Neat FM, Patapaa really respects her and treats her better than all her ex-lovers.

She added that although the penis size didn’t influence why she fell in love with Patapaa but she loves the size.

Liha Miller further said, her parents really like Patapaa even before they got married because all they cared about was him being a good man who knows how to treat a woman like a queen.

Patapaa also revealed he will release a song featuring his wife very soon adding that the song has already being recorded.