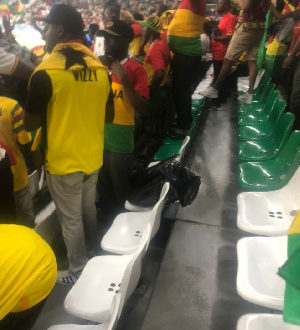 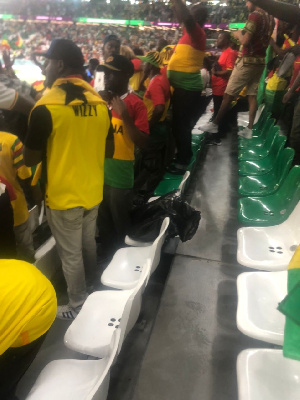 Around the 80th-minute mark, a number of black polythene bags were passed around in the stands that hosted the Ghanaian supporters who were at the Education City Stadium to witness Ghana’s dramatic 3-2 victory over South Korea.

The bags came with a short message – “pick every garbage close to you and put it in the bag’. For someone who had been wowed by the stories of the Japanese supporters who clean up after every matchday, I found it exciting and commendable that my countrymen were pursuing the same path.

Immediately, the supporters on my row which included the General Secretary of the Ghana Football Association, Prosper Harrison Addo scanned around them and picked whatever item on the ground and placed it in the black polythene bag.

Shortly after, a member of the leadership of the Ghanaian community in Qatar appeared with more bags and appealed to the over-jubilant supporters to help clean the stadium.

With Ghana chalking a famous and dramatic 3-2 victory and brass band music blazing inside the stadium, it was always going to be difficult to have the attention of all the supporters but as typical of Ghanaian hospitality, a sizeable number stayed and helped clean the stadium.

The team, made up mainly of Ghanaian residents in Qatar toured the entire facility with particular focus on the Ghanaian side of the stadium and picked up everything they deemed to be garbage.

The classy gesture by the Ghanaian capped off what has been an absolutely fantastic day for every Ghanaian.

The positive wind blowing in Ghana and every Ghanaian community in the world was made possible by a shrewd defensive performance by the Black Stars against South Korea.

Mohammed Kudus fired home from close range to steal victory for Ghana after the Koreans had come back from two goals down to draw 2-2.

The victory has pushed Ghana to second in Group H with 3 points and goal difference of 0.

The Black Stars will return to action on Friday, December 2, 2022 against Uruguay in a game many has tagged as revenge after Uruguay eliminated Ghana in the same competition 12 years ago.

Previous Ejura sub-chief destooled over robbery attacks by nomadic herdsmen at Miminaso No. 2
Next Ghana’s public debt increased by GH₵93bn due to cedi depreciation – Ofori-Atta