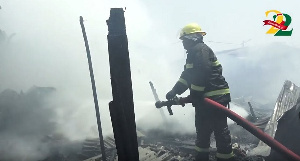 Another market in Accra has recorded a fire incident.

The Mallam Atta market, located at Accra New Town, shortly after noon on Wednesday, February 17, 2021, was filled with screams alerting traders to safeguard their wares as part of the market was up in flames.

When GhanaWeb visited the scene, some traders attributed the cause of the inferno to a few factors.

They told the news team that it may have been caused by a leaking gas cylinder, or an illegal electricity connection.

The fire outbreak which was being handled by some traders before the fire service arrived, has however resulted in the ruin of several shops and goods worth thousands of cedis.

Some traders praised the youth and fire service for their timely intervention to salvage the situation before it got to spread to other parts of the market.

Fire Service personnel at the scene declined to speak with journalists. They however directed all journalists to channel their questions to the Public Relations Officer of the Ghana Fire Service at its headquarters.

Meanwhile, the latest incident at the Mallam Atta market follows a series of fire outbreaks that have recently occurred across the country.

Two weeks prior to that, the Odwana market in Accra was engulfed by fire with a similar incident occurring at the Koforidua market which have all resulted in the loss of property.