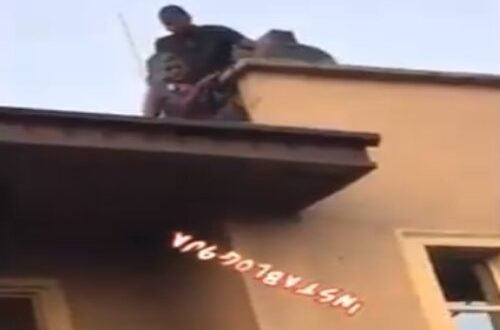 It was a mission impossible for a young thief when he got trapped in the roof of the building he intended to raid.

In a video that has since gone viral, the young man was captured on top of the building while residents wait for him below.

It is said the owners of the apartment woke up to noise from neighbours, only to discover the man on their rooftop at Fagba, Lagos.

The inexperienced thief broke down in tears when one of the area youth climbed the building with a cutlass.

However, it is reported he was unharmed and was handed over to the police for justice.

Previous Man murdered, penis chopped off at Saltpond
Next VIDEO: Rawlings lies in state at the Accra International Conference Centre