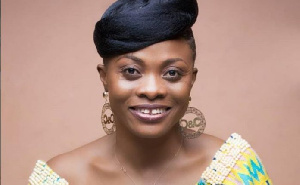 Popular Ghanaian gospel musician, Diana Asamoah, has cracked the ribs of her fans again with another video in which she was seen trying to express herself in English.

She was having an interview with TV Africa where she wanted to promote her political party, the New Patriotic Party’s (NPP) motto.

When asked to repeat herself, she tried slurring the statement saying: “The bar tery is the Lords”.

She herself was laughing amid her speech and said again that Ghanaians must stop the hypocrisy.

That too, Miss Asamoah said: “Ghanaians must stop the hypocre”, and started laughing again.

The presenter encouraged her to repeat what she said, but she would not talk anymore saying to the presenter: “You know what I mean”.

Fans have reacted to the video with the majority of them laughing.