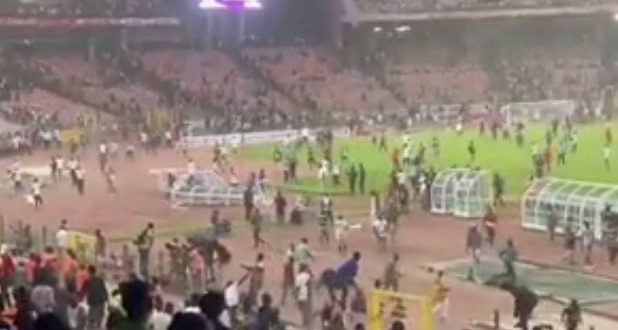 VIDEO: Chaos at Abuja stadium after Ghana’s victory over Nigeria

Partey scores for Ghana in game against Nigeria

Angry fans cause commotion at stadium

There was complete pandemonium at the Moshood Abiola Stadium as a number of soccer fans besieged the pitch following Nigeria’s defeat in the World Cup 2022 playoff in Abuja.

It is unclear what sparked the confusion but visuals from the stadium showed a mammoth crowd storming the field with rage. Some were spotted pelting objects while others could be seen running helter-skelter. A section of the field was engulfed with what appeared to be smoke.

The Black Stars of Ghana booked a place at the 2022 World Cup in Qatar after a 1-1 draw with Nigeria. Ghana qualified based on the away goal rule having held Nigeria to a goalless draw in Kumasi, Friday.

A ferocious strike from Thomas Partey hit the back of the net in the tenth minute, making Ghana take a shock lead. Celebrations were however cut short when the referee awarded Nigeria a penalty after Denis Odoi fouled Ademola Lookman in the penalty box.

William Troost-Ekong’s kick could not be saved by Joseph Wollacott, giving Nigeria an equalizer.

Three other slots are also up for grabs to complete the continent’s five slots.