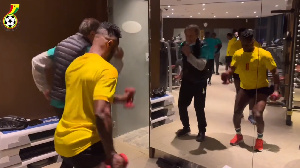 The Black Stars held their first training session on Sunday at their base in Doha Qatar as part of preparations for the 2021 African Cup of Nations.

The training session was held indoors with players in the gym training on the treadmill, lifting weights as well as improving on their core strengths.

In all, 8 players who have reported to training took part in the training session led by coach Milovan Rajevac

Some of the players who took part in the training session included Stratsburg defender Alexander Djiku, Lawrence Ati-Zigi, Mubarak Wakasi and Daniel Kofi-Kyere.

The local-based players, Richard Attah, David Abagna, Maxwell Abbey Quaye and Fatawu Issahaku were all present during the training session.

Captain Andre Ayew was yet to report to training as he played a game over the weekend in the Qatar league netting a brace.

A number of training sessions have been lined up for the Black Stars to engage themselves in before the tournament kicks off in Cameroon on January 9, 2021.

Ghana will take on their counterparts in Morocco in their first group game on January 10, 2021, before proceeding to face Gabon and Comoros.

Previous Biography of Desmond Mpilo Tutu: South African Archbishop Emeritus
Next ‘Pure water’ to be sold at GHp40 from today