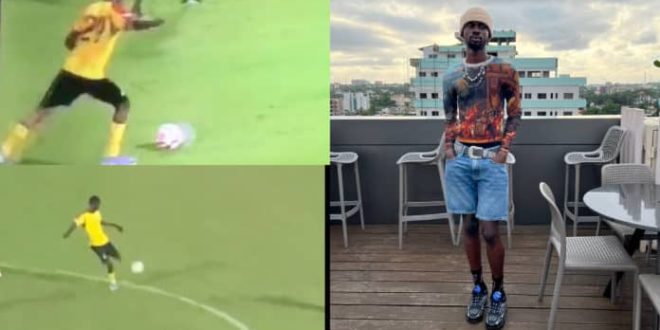 Musician Black Sherif was given the opportunity to display his football skills when the Black Stars faced the All-Stars at the Accra Sports earlier today.

Blacko who started as a footballer decided to join the Black Satsrsd side as he played alongside the likes of Andre Dede Ayew, Daniel Amartey and Kwadwo Asamoah.

The “Kwaku Killer” hitmaker showed that besides music, he possesses great football skills which he displayed on the pitch.

At a point, he was allowed to take a free-kick. Black Sherif ballooned the ball with his left foot which was not too far away from the goal post.

Prior to the game, Black Sherif performed at the Accra Stadium to some supporters before changing to join the Black Stars warm-up.

One of the major highlights of the Black Stars v AllStars game is the brilliant solo goal scored by skipper Dede Ayew where he had to dribble past several players to goal.

Black Sherif has got love for football. One of his throwback videos shows when he used to play regular football at Konongo where he had dreams of becoming a professional footballer.