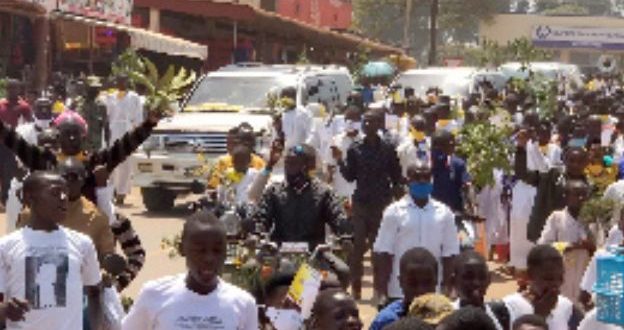 In an exclusive investigation BBC Africa eye uncovers how rogue pastors exploit the trust and belief of their followers for profit and power in Uganda.

For hundreds of millions of Africans, Christianity is the cornerstone of their existence. But an increase in rogue pastors has led to a fight for the soul of Christianity in Africa

BBC Africa Eye reporter Peter MacJob travels to Uganda to meet the new religious movements rejecting Christian conventions, the traditional pastors working hard to maintain their flocks, the families who have suffered tragic losses at the hands of rogue pastors, and those who have abandoned religion altogether.

Over 80% of the population in Uganda are Christian. Churches offer blessings, life changing miracles and exorcisms’ of evil spirits.

In 2000 a cult in Kanungu, Western Uganda called the Movement for the Restoration of the Ten Commandments of God – believed the new millennium signalled the end of the world. Over 500 members of its members were put in a church. The doors and windows were nailed shut and the church was set alight. Everyone in the church died.

In Kagadi, Western Uganda thousands of followers belong to a religious sect known as ‘Faith of Unity’. Their leader Omukama Bisaka perceived himself as God with supernatural powers. Despite passing away 1 year ago many of his followers believe that he will return.

Faith of Unity is so popular that it has support from the government, including the President.

Their teachings reject the bible as they are of the view that it has been introduced to distort the minds of Africans. Instead they use a version that was written by their former leader Bisaka. In theirs Jesus does not exist and their leader is portrayed as a Deity

Asiimwe George William was a senior leader in the Faith of Unity for over 20 years. He tells Africa Eye: “When I read the characteristics of a cult I discovered that we actually belonged to a cult.”

He admits things were made up; “Things we used to concoct, but they did not harm directly anyone. We wanted to sustain our faith. That’s why we concocted them.”

BBC Africa Eye put these claims to Faith of Unity but they declined to comment.

Pastor Rodgers Atwebembeire has spent years looking at new religious movements across East Africa. He breaks down how these leaders act.

“Their word is as authoritative as the Bible. When they speak, God has spoken. Their followers are expected to obey them without question.”

Despite there being over 40,000 evangelical churches in Uganda. Many are struggling to maintain their memberships.

Peter met a family who opened up their home to a pastor and his wife. Their 4-year-old daughter was allegedly murdered by the couple for a human sacrifice.

The mother says: “When you looked at him you would think he was a man of God. He used to praise, worship, and clap his hands. He would pretend to be spiritual, but it was all a lie.”

Due to the rise of rogue pastors many Ugandans are turning to other secular forms such as Humanism. It’s core principles are based on accepting everyone regardless of religion, culture or sexual orientation.

Pastor Rodgers Atwebembeire says: “I really do think that in the coming 10 years or 15 years we are going to see a very huge shift. We will see a lot of Humanism, not only taking over our institutions of education, but also even what used to be Christian churches and congregations.”

With charlatans and con men preying on the faith of millions, what is the future for believers in Uganda and across Africa?