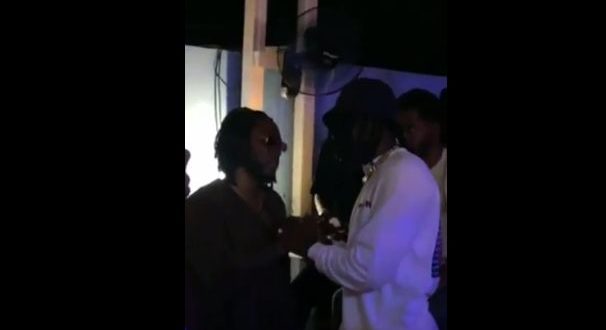 Kendrick Lamar, American rapper and recoducer, was captured hanging out with his label mate, Stonebwoy, at a listening party for his album “Mr. Moral & The Big Steppers” in Accra on Saturday, May 14, 2022.

In a video sighted on social media, the Universal Music Group signed artistes were seen exchanging pleasantries and smiling, while in other shots, the two were captured grooving to songs off the album.

The two probably have a lot to talk about, as both have risen to prominence in their respective genres, thus pop and reggae & afrobeats culture.

Kendrick Lamar, who is currently promoting his latest album “Mr. Moral & The Big Steppers”, signed an exclusive, worldwide administration agreement with Universal Music Publishing Group, in October of 2020. Lamar has won 13 Grammy Awards and in indisputably one of the most influential rappers of the millennium.

Stonebwoy on the other hand just released his debut label single dubbed “Therapy”. The Ghanaian musician icon, on May 3, was announced by Universal Music Group as newest artiste to join the label’s division: Def Jam Recordings, 0207 Def Jam and Def Jam Africa. With a career that transcends language, geography and demographics, Stonebwoy is rated as the best reggae & dancehall, and afrobeats artiste from Africa.