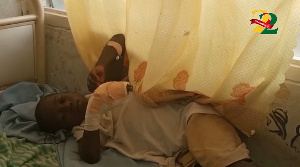 The 10-year-old boy who almost had his hand rotten off is currently undergoing surgery processes at the Eastern Regional Hospital in Koforidua.

Michael Narh, who was knocked down by a tricycle about two weeks ago but was not sent to the hospital early, almost lost his hand, as the hand began to rot while his poor mother looked on helplessly.

It took the intervention of GhanaWeb‘s Eastern Regional Correspondent, McAnthony Dagyenga and the Assemblyman for the Abrewankor Electoral Area, where Little Narh and his mother are residents, to quickly send the boy to the hospital.

According to Abigail Namo, the mother of Michael Narh, she did not send the boy to the hospital because she did not have money.

However, when GhanaWeb‘s Correspondent visited the Azza community, he realized that there is a health center situated next door at Labolabo, a walking distance from Azza.

Meanwhile, transportation fare from Azza, where they live, to the Eastern Regional Hospital is GH¢5.

GhanaWeb‘s inquiry also showed that the boy’s health insurance card had expired, adding to the reason for the delay.

When contacted, the Medical Director at the Eastern Regional Hospital, Dr. Akoto Ampaw, told Ghanaweb that they had requested for imaging to confirm how deep the hand had been affected.

“We can confirm that he was brought in on Saturday and currently at the Surgical Ward. We have admitted him for further treatment.

“At the time he came, we did an assessment to the trauma in the hand and the initial thinking is that it may involve soft tissue injury.

“However, we have requested for imaging to confirm if the bones and other structures are involved,” he said.

Dr. Akoto Ampaw indicated that his outfit was working to have the boy reactivated onto the national health insurance scheme so that both the hospital and the insurance scheme can appreciably cater for the cost of treatment for him.

“It is true that the cost of treatment would be high if you consider the antibiotics and what we intend to do for him; And at the moment we are aware that he does not have insurance but we have begun treatment just to be sure that we can save his hand which is very vital to his wellbeing in the future.

“Subsequently, we would explore ways the cost would be absolved and one of them is to consider the possibility of paying for his insurance so that when he is captured by insurance, at least, we know that we can get part of his treatment covered.

“Definitely, the hospital is going to bear some cost of his treatment,” the Medical Director said.

Mother of Michael has also granted permission that any help should be channelled through the Assemblyman for the Abrewankor Electoral Area, Stephen Nyumutsu phone.