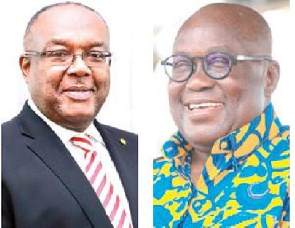 Former High Commissioner to the United Kingdom (UK), Emmanuel Victor Smith, has stated that President Akufo-Addo’s resolve to crush political vigilantism in the country must be commended.

He said what the president proposed during his State of the Nation (SONA) address last Thursday in Parliament was in the right direction.

“Making that profound statement on vigilantism and going to the extent of using legislation to disband it if voluntary mechanisms fail goes to suggest that the president has done well,” he told Kasapa FM in Accra.

He said, “I have always told the president to work towards disbanding vigilantism because it is now getting out of hand.”

Mr. Smith, a former Eastern Regional Minister said, “More importantly, the police should work hard by reinforcing the laws of the country to disband vigilantism. So I couldn’t have agreed more with what the president said in his State of the Nation Address.”

President Akufo-Addo’s proposal to solve the vigilante menace has been lauded by many, but some leading members of the opposition National Democratic Congress (NDC) are still indifferent and want vigilante groups to stay ahead of the 2020 general elections.

The president said vigilantism is a threat to peace and stability and reiterated his commitment to nip the problem in the bud.

“Our children and grandchildren will not forgive us if we were to compromise our peace and stability. I will not permit that to occur under my watch,” he said in Parliament.

“I want to use the platform of this message to make a sincere, passionate appeal to the leaders of the two main political parties in our country, NPP and NDC, to come together, as soon as possible, preferably next week, to agree on appropriate measures to bring an end to this worrying and unacceptable phenomenon of vigilantism in our body politic,” he added.

“The events of last Monday in Kumasi where a meeting of the national and regional executives of the opposition NDC was broken up by acts of violence, leading to the tragic death of a citizen, have reinforced the urgent need for us to find the path,” he said.