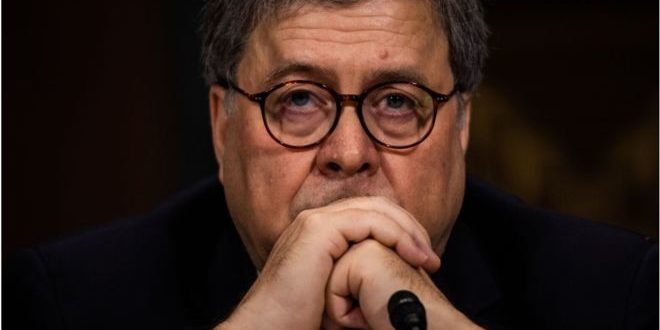 Democrats in the US House of Representatives are about to vote on whether to hold Attorney General William Barr in contempt of Congress.

President Donald Trump has hit back by asserting executive privilege over the report, shielding it from public view.

The White House and Congress accused each other of abusing power.

Why is there a contempt vote?

The judiciary committee will vote on Wednesday on recommending a contempt resolution against the attorney general for a full House vote.

Democratic lawmakers took action after Mr Barr did not comply with a legal order to release the Mueller report minus the redactions.

The 448-page Mueller report was released last month with parts blacked out, including information that is classified or linked to pending investigations.

The special counsel did not conclude there was a criminal conspiracy between Moscow and the Trump campaign to influence the 2016 US presidential election.

But the inquiry detailed 10 instances where Mr Trump possibly attempted to impede the special counsel’s investigation.

Democrats say they need to see the full report and its underlying evidence to investigate possible obstruction of justice by Mr Trump.

The New York Democrat said his party had “no choice” but to move forward with the contempt vote, “otherwise, we have a monarchy”.

But Doug Collins, a leading Republican on the committee, defended the Department of Justice’s decision to withhold the Mueller material.

The Georgia lawmaker said Democrats were acting out of anger and fear “without any valid legislative reason”.

Could the attorney general be charged?

For Mr Barr to actually face the prospect of charges, the entire House – where Democrats hold a 235-197 majority over Republicans – would have to vote against him.

The measure may be largely symbolic as it is viewed as unlikely that the Department of Justice would indict its own head with criminal contempt.

However, it would send a powerful message to the White House that congressional Democrats won’t retreat in an increasingly bitter showdown.

Mr Barr would be the first attorney general held in contempt of Congress since the Obama administration’s Eric Holder in 2012.

How did the White House respond?

The White House accused Democrats of a “blatant abuse of power” and blocked access to the full Mueller report by claiming “executive privilege”.

Executive privilege allows a president to keep certain materials private if disclosing them would disrupt the confidentiality of the Oval Office decision-making process.

Press Secretary Sarah Sanders said the president had taken such a step at the attorney general’s request to reject “unlawful and reckless demands” by Democrats.

She added in a statement: “They didn’t like the results of the [Mueller] report, and now they want a redo.”

The judiciary committee chairman argued the White House was misapplying the doctrine of executive privilege.

The House Judiciary Committee has formally requested that Mr Mueller testify, though a date has not been set.

The special counsel is still a Department of Justice employee, which means the attorney general could prevent him from testifying.

Mr Barr has previously said he would not mind Mr Mueller testifying before Congress.

Mr Trump, however, has said the special counsel should not testify, tweeting: “No redos for the Dems!”

When Mr Mueller initially handed in his report, a spokesman said he would be leaving the department “within the coming days”.

If he does quit, he will become a private citizen and able to testify regardless of the department’s wishes.