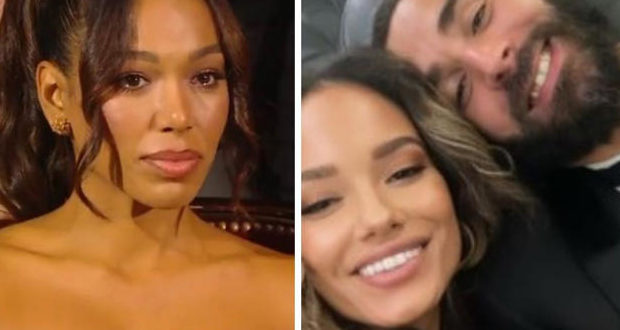 Cheering him on were millions of football fans around the world, including some of the biggest names in the sports industry.

Apart from his mother who accompanied him on stage, also in Benzema’s corner were the two women in his life; his current girlfriend and his ex-wife, who is also his baby mama.

In clips and pics posted on social media, Benzema revealed that both his current girlfriend Jordan Ozuna, and his ex-wife Cora Gauthier, were his special guests at the awards in Paris.

“Proud is an understatement”, the woman shared on her Instagram stories alongside pics of Benzema and the Ballon d’Or award.

Gauthier, who accompanied her son Ibrahim, whom she shares with Benzema, also showed her support to her ex.

“We are so proud of you”, she shared alongside a pic of the star player in an Instagram story.

According to Marca, Gauthier and Benzema married in 2016 after a year of dating. It’s unclear when they officially split.

Benzema – who is notoriously private about his family life – also has another baby mama; Chloe de Launay, whom he shares daughters Melia and Nouri with.

Benzema has a string of beautiful women he has dated.

Apart from the above mentioned ones, he’s also been linked to US pop singer Rihanna.

In 2015, the singer and soccer star fuelled rumours they were dating after being spotted together on several occasions.

But according to the Spanish publication Don Balon Rosa, the striking duo never made things official because of her ex-boyfriend Chris Brown.

The publication reported: “Rihanna loved Karim, and with him, she had a lot of fun.

“But she told him she did not want to break his heart, and she confessed that she’ll always love Chris Brown.

“Rihanna said it was difficult to compete.”

Later that year, Rihanna was linked to another rapper, Drake.

Benzema went on to date his partner Cora Gauthier.