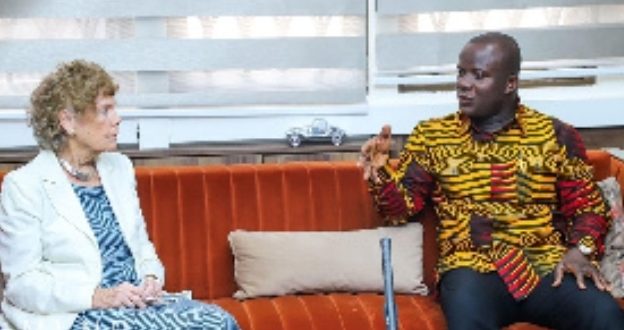 Share
The UK Prime Minister’s Trade Envoy to Ghana, Baroness Catherine Hoey on Friday, 25th February 2022, called on the Minister for Lands and Natural Resources, Samuel A. Jinapor in Accra.

Speaking at a brief meeting with the Envoy and her team including UK’s High Commissioner to Ghana, Mr Jinapor said relations between Ghana and UK is growing stronger and the Ghana government is determined to further strengthen the bilateral ties.

He said the President of the Republic, Nana Addo Dankwa Akufo-Addo is fully committed to ensuring the sustainability of Ghana’s forest cover whiles embarking on aggressive afforestation.

According to him, initiatives such as the Green Ghana Project, robust afforestation towards the restoration of degraded lands forms part of the government’s aggressive afforestation steps in contributing towards global action to mitigate the effect of climate change adding that Ghana is on also course to begin the issuance of FLEGT licenses.

The Minister further mentioned that the President of the Republic will Tuesday, 1 March, launch the 2022 Green Ghana project with an ambitious target of 20 million trees.

He mentioned that the President’s vision of creating jobs across the country culminated in initiating the one District one factory program to help create jobs nationwide.

There are several areas in the Ministry that we can work together to boost trade and investment and “your appointment will further push relations between Ghana and the UK”, he said.

The Minister also congratulated the government and the people of the UK for organising what he described as “a spectacular COP 26 “ held last year and in particular the fact dialogue.

Baroness Catherine Hoey said in her next visit she will tour the Northern part of Ghana in an effort to push investment to that part of the country.

She again called for closer collaboration between Ghana and the UK in the area of gold trade, where UK companies can purchase the precious mineral directly from Ghana rather than buying from Dubai and Russia, this, she said, will enable Ghana to make some direct revenue inflows to soar up her economy.

For her part, the UK High Commissioner to Ghana, Harriet Thompson described the Lands Minister as “a very visible Minister “ and commended him highly for improving the Lands and Natural Resources sector of the country.