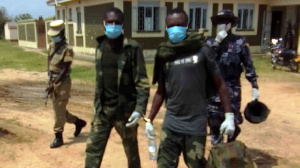 The Buliisa District security team is set to hand over at least two Congolese military personnel, and two rifles in exchange for over 30 Ugandan fishermen arrested on Lake Albert on DR Congo side.

The Officer in charge of Buliisa Central Police Station, Mr Johnson Niwandinda on Tuesday handed over the soldiers to the Pakwach District Police Commander, Mr Frank Muzoora who will hand them over to his counterparts in DR Congo.

He said the soldiers were arrested on Lake Albert last week after entering Uganda illegally.

“These brothers of ours were arrested on our side while armed with the rifles in Wanseko and Bugoigo landing sites, and good enough they had not caused any harm to Ugandans,” Mr Niwandinda said.

“Don’t enter another country without an official document. When you also arrest Ugandan fishermen on the lake and take them to DR Congo, don’t mistreat them, respect fishermen because they are human beings like you,” Mr Niwandinda warned them.

He said it had been a common practice for Congolese soldiers to enter Uganda and arrest fishermen on the lake in the disguise of patrolling, detain them in DR Congo and later ask for a ransom of between Shs1.8 million per boat before releasing them.

The Officer In-charge Dei army barracks, Maj Wilson Kyaboona Bataga said Congolese authorities have been calling for the exchange of captives and promised to hand over the soldiers to their counterparts in exchange for 31 Ugandan fishermen who were arrested by the Congolese army on January 19 on Lake Albert.

“They have handed over these people to us and we are going to sit with the Congolese authorities when they bring our 31 civilians (fishermen) who were arrested on the same day, we shall also, hand over these soldiers,” he said.

“Congolese authorities have been on my neck telling me to bring their soldiers so that they also handover our people,” he said.

Mr Muzoora advised Ugandan fishermen to always carry out fishing on the Ugandan side and to comply with authorities doing patrol on the water to avoid revenge.

He also asked the Congolese army to avoid entering Uganda’s water while conducting their patrols.