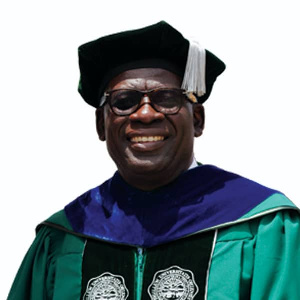 This follows an election held in the four campuses of the University namely Winneba, Ajumako, Kumasi and Mampong.

At the end of the process, Prof. Andy Ofori-Birikorang who is the Dean of the Faculty of Foreign Languages and Communication Studies garnered the maximum votes to emerge as the newly elected Pro-Vice-Chancellor.

He pulled 284 votes to beat his closest contender Prof. Yaw Ameyaw, the director in charge of quality assurance at the university, who pulled 110 votes.

The third contender Prof. Dominic Mensah who heads the Institute for Teacher Education and Continuing Professional Development at the University also obtained 63 votes.

The University has been without a substantive Pro-Vice Chancellor since the induction of the current Vice-Chancellor, Prof. Anthony Afful-Broni on 17th September 2018, who held the position before his elevation.

However, two persons have acted in that capacity as attempts to hold elections to elect substantive Pro-VC have always been hit by court injunctions triggered by former President of UTAG-UEW Dr. Frimpong Duku.

The Winneba High Court on Tuesday 18th November struck out Dr. Frimpong Duku’s last application to stop the process thereby paving the way for the University to hold the elections today Thursday November 21.

Speaking in an exclusive interview with Starr News Kwaku Baah-Acheamfour, the newly elected Vice-Chancellor indicated that he will complement efforts of the Vice-Chancellor in promoting teacher training as well as create a more vibrant platform for academic progress at the university.

Prof. Andy Ofori-Birikorang who is a known gender activist intimated that his tenure as Pro Vice-Chancellor will see a lot of women climbing higher in terms of leadership roles as the best of environment will be created for them to develop themselves and to vie for higher positions.

He stressed that women development and participation in decision making and implementation will not only inure to the benefit of the University but the country as a whole, as women in the country have demonstrated over the years that they have the right attitude to support development.

He added that his tenure too will see an accelerated rate of academic progression in line with the ideas of the Vice-Chancellor and the University as more staff would be allowed to pursue further studies and knowledge which comes with enormous benefits especially, creative ideas to propel teaching, learning and administrative processes.

He emphasized that his victory ultimately brings an end to the rancour at the university as the number of senior members who voted for him not only show that Prof. Anthony Afful-Broni has the support of the senior members but are ready to work with him to propel the university to a higher level of excellence.