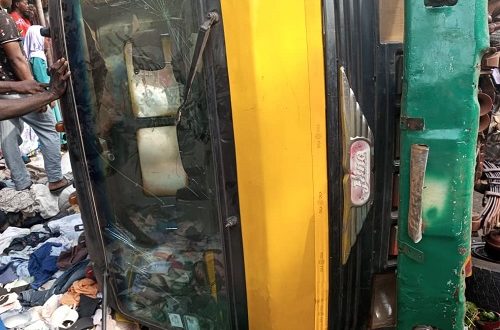 Two persons are feared dead in a gory accident at Central Market in the Kumasi Metropolis of the Ashanti.

The accident according to report occurred on Sunday January 8, 2023,  after a KIA Rhino with registration number GR 8342-Z, veered off the road and fell down on the traders.

An eyewitness, Sister Sawdatu spoke to OTEC News Jacob Agyenim Boateng, “The car had loaded bags of rice and was moving out of the market, we later discovered that the cargo car which was obviously out of control was moving back”.

“The vehicle toppled over and ended up trapping two traders”, she said.

She noted that, the two   females were in life threatening condition were rushed to the Manhyia Government Hospital for treatment.

She disclosed that, several traders escaped death in the gory accident as those who saw the vehicle out of control shouted to draw the attention of the traders who were in danger.