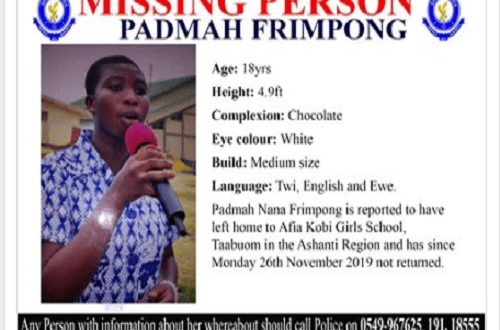 The Police are seeking assistance from the public to find two eighteen-year-old girls who cannot be traced by their families, ABC News has gathered.

The information posted on the Police Service’s Facebook page indicated that one of the missing persons, Padmah Frimpong is a student of Afia Kobi Girls School at Taabuom in the Ashanti Region.

Padmah Frimpong, according to the Police, is reported to have left home for school on Monday, 26th November 2019 and has since not returned home.

The other person, Hannah Apasnore, a teacher, is also reported to have been sent by his father to the Duayin Academy, where she teaches and has since not returned home.

The Police urged anyone with information on the whereabouts of the two girls to report to the nearest Police Station or contact its emergency numbers (191,18555) for a swift response.

The development comes at a time when Ghanaians are recuperating from the shock about the murder of four kidnapped girls in Takoradi who equally went missing under bizarre circumstances and were later confirmed dead by the Police in September this year.

Three suspects, Chika Innoidim John, John Oji, and Samuel Udoetuk-Wills, all Nigerians, are standing trial for their alleged roles in the kidnapping of the girls and subsequent murder.

In June this year, another teenage girl, Linda Akansaa, a student of the Juaben Senior High School was found dead after she reportedly went missing for a week.

The sixteen-year-old Home Economics student was found dead in a bush in Ejisu-Jamasi in the Ashanti Region after attempts to find her proved futile.

Akansaa was the second girl to die in a similar fashion in the community since 2017, a development that plunged residents in the area into extreme fear.

The body of Sophia Amma Ibrahim, a 16-year-old hair braider apprentice was dumped close to her house after been raped and murdered on Good Friday eve of 2017.

She had then just left her Jamasi home for work at Ejisu but did not return.