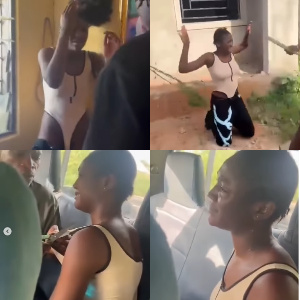 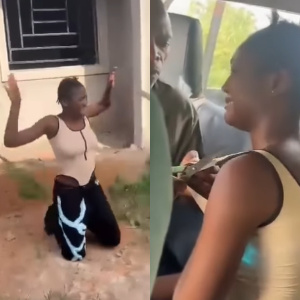 Nasarawa State Police Command has disclosed that they have arrested two persons allegedly involved in the assault on a young woman for allegedly snatching another woman’s boyfriend.

In a tweet, the police stated that they had commenced investigations into the issue and found the vehicle in which the woman was stripped naked.

“@PoliceNG @BenHundeyin @Sanchezbig17 sequel to the viral tweet of assault on a female teenager in Lafia, Nasarawa state, the Command swiftly commenced an investigation into the case. It is gratifying to state that, two suspects have been arrested in connection with the case.

“While the vehicle used in conveying the victim to an undisclosed location where she was assaulted has been recovered. Effort is ongoing to arrest the remaining suspects still at large,” they shared.

Their announcement comes after a video went viral of the Nigerian lecturer and his children beating and stripping the said young woman.

Father and children stormed the victim, Blessing Mathias’s room while she was barely dressed and dragged her out.

They commanded her to kneel while they caned her with branches from a tree.

Blessing, who was outnumbered by the family begged for them to stop abusing her, but the family came at her stronger.