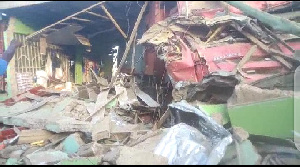 A tipper truck loaded with building stones has run into 15 shops at Awutu Breku in the Central Region.

The brakes of the truck with registration number GG 32-51-19 reportedly failed, leading to the incident on Tuesday dawn.

Rainbow Radio’s Nana Yaw Asare, in a report, said no casualty has been recorded, but the driver and his mate have sustained injuries.

They have since been sent to the hospital for treatment.

“The shops were closed at the time of the incident, if not we would have witnessed a sad incident today”, Nana Yaw Asare said in his report.

Officials from the National Disaster Management Organisation (NADMO) and the Police Service are at the scene to manage the situation.

Some of the traders who had their shops destroyed said they have not witnessed an incident like this in the area before.

They expressed gratitude to God but were not happy their shops were destroyed. 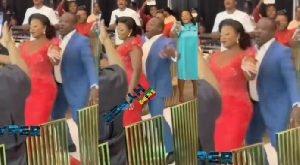