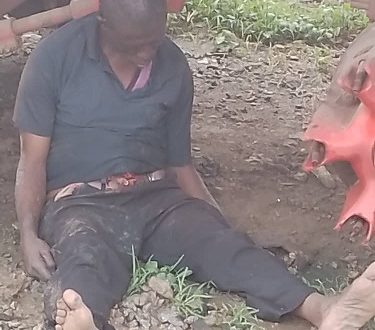 Alex Kwadwo Boateng was found dead at a place near Blue Ice Hotel on Saturday September 24, 2022.

Some residents in the area who spoke to OTEC News Kwame Agyenim said the deceased was on his way to take his Urvan bus when the incident occurred.

A fuel station attendant who lives in the area spoke to OTEC News “He’s our customer, he parks his car here at our fuel station, Mr Alex as we call him is the first to come here every morning for his car”

“We heard that, the suspected robbers attacked him and stabbed him in the stomach while he was on his way to take the car early Saturday morning”

The body of the deceased has since been deposited at the Okomfo Anokye Teaching Hospital by police in the area.