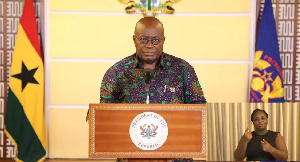 Transforming Ghana Beyond Aid: Key for next NPP government

The government under the leadership of the New Patriotic Party (NPP) over the last three and half years have stabilised and prudently managed the economy, Prince Appiah Debrah, Parliamentary Candidate for Klotey Korley Constituency has stated.

He said the NPP government under the dynamic leadership of President Nana Addo Dankwa Akufo-Addo through a strong economic management team has restored disciplined fiscal management, a predictable monetary policy, a sound banking system, lowering of inflation and interest rates.

Prince Debrah told the Ghana News Agency in an interview in Accra on Monday that better access and delivery of public services had become a hallmark of the presidency.

“We have turned agriculture into a major growth driver through our programme for Planting for Food and Jobs, helping improve farmer incomes, meeting local food needs, and exporting to the region.

“We have sowed the seeds for an industrial expansion through the One District One Factory and Strategic Anchor Industries policies to transform Ghana’s economy from an exporter of raw materials to that of a private sector powered value-added economy,” Prince Debrah noted.

Prince Debrah noted that based on the achievements over a short period of under four years, the NPP Election 2020 Manifesto offers Ghanaians better option than any other political party’s manifesto and called on the electorate to vote massively for the NPP.

He recounted that the NPP government had reduced the overall tax burden on businesses to stimulate production, and reduced electricity tariffs for all other consumers.

“We have made investments to balance the infrastructure gaps between major cities and towns, between urban and rural communities, and between suburbs, inner cities and Zongos,” he noted.

He said over the past three years the NPP Government invested in programmes and initiatives to protect the vulnerable and the disadvantaged, and to provide social safety, and expansion of the School Feeding Programme and LEAP.

He said the government have also reduced utility tariffs for households, increases in funding allocations to Persons Living With Disability, and strengthening the National Health Insurance Scheme.

“We have supported the youth and youth-owned businesses through NEIP, The President’s Business Support Programme, Campus Business Pitch and Greenhouse Village initiative.

“We have provided strong, decisive leadership in managing the Coronavirus pandemic and its effects, and committed significant financial resources in helping households, health workers, businesses, and workers to cope with the disruptions to lives, livelihoods, supply chains, and business continuity.

“The result of all of this is a doubling of our economic growth and the creation of over two million jobs in the public and private formal sectors since 2017 initiatives such as Planting for Food and Jobs, NABCO Graduate Programme and National Entrepreneurship and Innovation Plan,” he said.

He noted that as MP for Korley Klotey Constituency the development of all would be his priority.