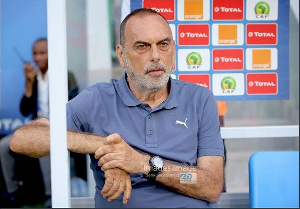 Recent comments from former Vice-Chairman of the Ghana Football Association, Joseph Ade Coker and the Deputy General Secretary of the New Patriotic Party, Nana Obiri Boahen about the $25000 monthly salary of Black Stars coach, Charles Akonnor has heightened the interests of Ghanaians about the salaries of national team coaches.

The two politicians believe that Akonnor is not a top-level coach and thus cannot earn more in monthly salaries than President Nana Addo Dankwa Akufo-Addo.

They also argued that a country like Ghana cannot afford to pay a national team coach $25,000 as a monthly salary.

After hearing the argument from Obiri Boahen and Ade Coker, GhanaWeb brings you the top five highest-paid coaches of the Black Stars in the past two decades citing a story published by Sportsobama.com in 2017.

He is the highest-paid coach of the Black Stars in the country’s history. He was on a $50,000 monthly salary.

The Israeli football manager who took English Premier League giants, Chelsea to their first-ever UEFA Champions League final but lost to Manchester United at the Luzhniki Stadium in Russia took over as the Black Stars coach in 2014.

Avram Grant took the Black Stars to the 2015 Africa Cup of Nations and lost to the Elephants of La Cote d’Ivoire Equatorial Guinea.

He was shown the exit door after he finished 4th in his second Africa Cup of Nations tournament in Gabon, 2017.

The Serbian is jointly the second-highest-paid Black Stars coach in history. He was paid $45,000 as a monthly salary for a year.

Goran became the 4th Serbian to be hired to steer the affairs of the Black Stars by the Ghana Football Association.

He placed 4th at the 2012 Africa Cup of Nations after losing 2-0 to Mali in the third-placed game.

The 2010 FIFA World Cup hero is the second joint highest-paid Black Stars coach together with his countryman Goran Stevanovic also on $45,000 monthly salary.

Milovan guided the Black Stars to the 2010 Africa Cup of Nations tournament in Angola but lost by a lone goal to the Pharaohs of Egypt in the finale.

He also led the Black Stars to the quarter-final phase of the 2010 FIFA World Cup in South Africa, making Ghana the third African country to achieve that feat after Cameroon and Senegal.

He left the shores of Ghana as a hero for Qatar shortly after the World Cup.

He was given a two-year mandate to win the 2019 Africa Cup of Nations in Egypt. Upon failing to achieve his target, he was relieved off his duties after his two-year mandate came to an end in 2019.

The Frenchman, whom some natives called “Crocodile” because they couldn’t mention his name Claude Le Roy was on a $30,000 monthly salary after taking over from Ratomir Dujkovic in 2006.

He won the bronze medal with the Black Stars at the 2008 Africa Cup of Nations which was hosted in Ghana.