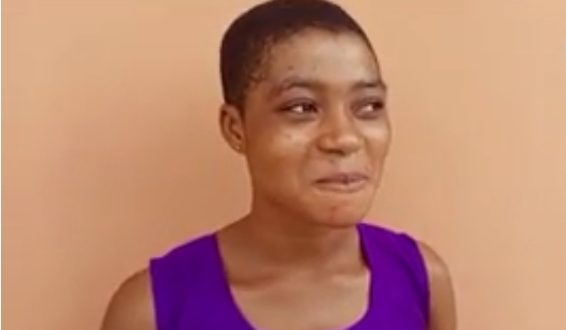 Share
After getting pregnant at age 17 for which she had to spend two years out of school in maternity, Martha Moses Akanpel, a 22-year-old mother, has gathered the courage to overlook stigmatisation, and return to school to continue her education.

Despite being burdened with childcare alongside the schooling vis-a-vis inadequate economic support, Martha, the mother of one, is poised to further her education and become the relevant person she hopes to be in the future.

Teenage pregnancy continues to be the bane of the progress of girl-child education in Ghana.

Available records indicate that between 2016 and 2020, a total of 555,575 teenage girls got pregnant in the country. All of these girls were in school.

The records indicate that only a handful of the teenage girls who got pregnant went back to school after giving birth.

Even though the situation is said to have improved, research has shown that as of the end of 2021, one (1) out of three (3) girls went back to school after pregnancy.

One of such brave girls is Martha Moses Akanpel who is a second-year Senior High School (SHS) student at Have SHS in the Akatsi North District of the Volta Region.

GhanaWeb‘s Eastern Regional Correspondent engaged the 22-year-old Martha who got pregnant at the age of 17 years in 2016.

Martha put the past behind her, went back to school to complete her Junior High School (JHS) and she is currently studying General Arts at the Have Senior High School.

In an interview, Martha told GhanaWeb that she went through an unpleasant ordeal during pregnancy as the economic situation at home was so poor.

“It wasn’t easy at all. I passed through a lot. Even the money for the antenatal, food, wasn’t easy to come by. Because it is only one parent working and he is the same person who catered for me, my pregnancy, and my siblings.

“We are four (children) and all of us are schooling. It wasn’t easy. It was very tough.

“Even after giving birth, it was people who supported me with money for hospital bills,” she shared.

According to her, the condition affected her studies “because after giving birth I had to stay home for two years. When I came back I had to start from where I stopped.

Martha, who narrated that she got pregnant as a result of peer pressure, sent a word of advice to her colleagues and other teenage girls in school to let their education be their priority.

“I followed friends. I had friends who would usually talk about their boyfriends. Some said it was their boyfriends who dropped them in their cars. That made me go and try it. When I did, I got pregnant. Unluckily for me, I didn’t get anybody who had a car.

“Whoever is watching me, you should concentrate on your education. As far as you are schooling, there is no guy outside who is going to help you. Stay away from sex.

“It is possible (to stay away from sex) if only you make up your mind,” she told young girls in school.

He indicated his commitment to keeping an eye on Martha’s progress.

“She’s one of the girls identified in the SHS in my constituency to have fallen victim to teenage pregnancy and after delivery, she reentered school and completed basic school and she is in the SHS now.

“We are monitoring her development. How she is managing her studies and the child… She is a case study for us in the constituency,” the MP told GhanaWeb‘s McAnthony Dagyenga.