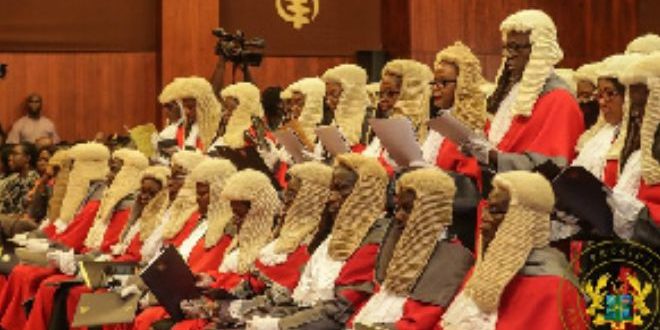 The Supreme Court justices who ruled that Deputy Speakers can vote

The Supreme Court on Wednesday, March 9, 2022; delivered a ruling that affirmed that a deputy Speaker of Parliament retains their vote even when they are presiding over the House.

A seven-member panel of the apex court via a unanimous decision handed down the ruling which also declared parts of Parliament’s Standing Orders as unconstitutional.

The Justices who sat on the issue, according to a myjoyonline report were as follows:

The Justice Jones Dotse-led panel by their ruling affirmed that the events of December 1, 2021 that saw Joseph Osei-Owusu, the First Deputy Speaker, count himself whiles presiding to support the approval of the 2022 Budget was constitutional.

The NDC Members of Parliament boycotted the vote that rescinded their earlier rejection of the same ballot before its approval by the Majority Group alone.

Whiles upholding arguments by the Attorney General and Minister for Justice, Godfred Yeboah Dame, the court also struck out portions of the standing orders of parliament which reads: “A Deputy Speaker or any other member presiding shall not retain his original vote while presiding.”