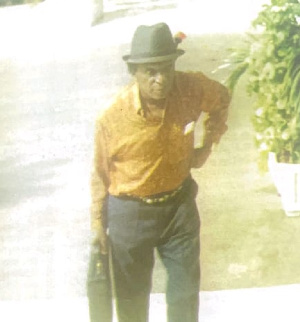 Share
Many have walked the surface of the earth but a few get to be called great by their exploits. The history of the people of Ashanti is told with that of great men and women whose impact extended beyond the ancient Ashanti Kingdom.

Fulfilling the niche carved by his kinsmen as being inherently industrious, Nana Kofi Genfi II alias Nyemesem of Kumasi Nurom lived to attain the height of a true Ashanti great.

His autobiography tells the story of a man who defeated the hurdles of life in various forms to attain success.

He was born at Akyeremade, near Adum to Opanyin Kwame Genfi, a businessman from Kwaso near Ejisu, Ashanti, and Madam Adwoa Pinaman otherwise known as Abena Kwabena a bed trader of Nurom village, Kumasi, in the year 1914. At the age of 7, he was sent to stay with his paternal uncle Opanyin Kwadwo Mosi Boateng of Mowere near Kode in the year 1921.

At Mowere, a young Nana Genfi attended to some 100 pigs belonging to his uncle and took exceptional pride in that job as the pigs became his pets. He returned to Kumasi in the year 1923 and later his mum took him to Kwaso. His father who had then traveled to stay at Koforidua in the Eastern Region sent for him from there.

One Opanyin Kwame Duodo ex-Offinsohene, a friend of his father took him to join his father for some time and then moved on to stay in Nsawam. Opanyin Kwame Genfi was a trader in some specially designed velvet cloths sewn in multiple colours. He however died by a car accident when he was returning to Nsawam from Accra in 1924, forcing his son to return to Kwaso to live with his father’s uncle Opanyin Kofi Adwumako.

His mother sensing the need to educate his son in January 1925, sent him and his senior brother to the Kumasi Government Boys School.

With strict supervision and interest in his education by his mother, Nana Genfi became studious and always fell in the 3rd to the 6th positions in class. He left school after passing the 7th Standard Certificate Examination.

He was employed by the Water Works, a division of the Public Works Department (PWD) Kumasi as a pipe fitter assistant on a daily wage of One shilling or twenty-five shillings monthly, exclusive of Sundays. His appointment was made possible by his good performance at football.

PWD had a competitive departmental football tournament for which the then director of the institution, Mr. Hunt recruited Nana Genfi for a job based on his footballing ability.

3 months later in 1934, he left PWD and secured another job as an assistant store keeper with Messrs ‘ C. Mohawage & Co’ a Lebanese trading firm which was dealing in velvet materials.

It was during his time in the store that he met his first wife Madam Yaa Achiaa in June 1934. After 6 months of service with the company he got another job with United Africa Company (UAC) as an Assistant Station Clerk with a lower pay i.e 30 shillings a month.

However, with a strong desire to be on his own, Nana Genfi after making some savings left UAC, bought himself a typewriter, and practiced as a public letter writer at the Asafo roundabout Kumasi. It was through this practice that he had an appointment as Native Court Registrar at Suma (Nweremeh) near Sampa a traditional authority in Wenchi District 1934-1936.

He returned from Suma to establish the first large-scale commercial firewood enterprise in Kumasi in 1936-1937. He acquired a large forest concession as a source of firewood supply from Aputuogya, a village on lake road in Kumasi. He employed a number of felling laborers, put them in the forest and his part was to hire trucks and cart the firewood to the Kumasi Central Market, where his wife was supervising some 30 or so young girls who did the retail on lengthy tables stretched over hundred yards. 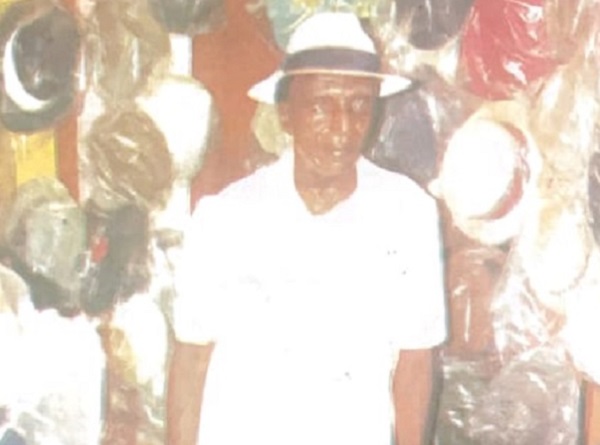 In the year 1936, many parts of the present Kumasi Central Market were lying empty or unoccupied. The business although flourishing was short-lived. The attempt at that time for a scholar to deal in firewood was looked upon as a degradation and thus abominable to the notion of the ignorant Ghanaian. So his mother’s friends advised or teased her to tell me to close down the business. He had to obey and wound up the business despite the amount of money he invested into it.

He then switched to Beer Barkeeping Business. He was the first Ghanaian to run a Beer Bar in Kumasi Adum in 1937-1939. Prior to that, the beer bar venture was solely dominated by Lebanese and foreign companies.

With a burning desire to join the army, Nana Genfi later disposed off his store and enlisted in the army. His bravery in the army made him go on active service in India and Burma where he fought gallantly at the war front and held the rank of Staff Sergeant from 1939-1946. His exploits in the army earned him four War Decorations.

On demobilization from the Army, he entered the then Gold Coast Civil Service as 2nd Division Clerk, Political Administration 1946-1949.

He held the office of the Confidential Clerk (Private Secretary) to the then Chief Commissioner of Ashanti (C.C.A) for two years and Court Registrar D.C’s Court, Obuasi for one year.

Having passion for entrepreneurship, Nana Gyenfi left the Service to establish in Nurom, Kumasi, the first Private Commercial Rest-house in Ghana. The Tajmahal in the year 1949, is now known as Nurom Hotel Annex. The main Nurom Hotel was opened by Otumfour Opoku Ware on the 4th December 1976.

He went on to grow a business empire under the umbrella of Nurom Multi-Trade Ltd.

He was one of the first or the second people who established large-scale Poultry Farms in Kumasi in the year 1959, and the 1st to establish commercial rabbitry in Ghana in 1968.

One of the pioneer Sawmillers in Kumasi, his company was Gold Coast Wood Workers Ltd in 955-1962.

In the year 1957, he was the first person to enter into the bottle-buying business by entering into contract with Kumasi Brewery Ltd (before the company set off). He supplied the company empty beer bottles and he was able to meet the demand of the company singlehandedly, for 2yrs. He mobilized supply agents all over the country who supplied his empty bottle requirement.

He was the 1st person to establish a commercial car wash business in Ghana in 1950. He was also the first person to open ladies’ and gents belt manufacturing business in Kumasi in 1951. To sum up, it is worthy to mention the businesses he brought into Kumasi and Ghana through his ingenuity. The industrious Nana Kofi Genfi II was also known for owning a commercial sponge farm.

Beyond his business life, the ever-striving Nana Genfi II attained success in the political space despite facing various challenges.

Two years after his return from his India and Burma campaigns, Nana Genfi II in 1948 took to politics and stood for parliamentary election in the Atwima-Amansie Constituency as an independent candidate in 1954.

The election held on June 15, that year did not only see him suffer defeat against a candidate of the then popular Convention Peoples Party but Nana Genfi was saddled with debt after the campaign.

His status as an opposition to Kwame Nkrumah’s CPP came with consequences that posed a threat to his life and career.

He suffered various forms of attacks at the hands of CPP action troopers and was arrested three times before he fled to France and subsequently London after he had spent six months in neighboring Ivory Coast as a political refugee.

After Kwame Nkrumah, Ghana’s then president announced amnesty to political refugees, Nana Genfi II returned to Ghana in 1962 only to be arrested a week after on allegations of brought bombs from Europe to be used in the Kumbumgu bombing assassination attempt on the president.

Several weeks after his detention, Nana Gyenfi II was released from the Cantonments Police Cells.

Motivated instead of being demoralized in his political pursuit by the troubles he attracted, Nana Genfi II held on to his political career and stood for another parliamentary election in 1969.

This time, he contested the Atwima-Amansie Constituency seat on the ticket of the Progress Party under the leadership of Dr. K. A. Busia and won by an overwhelming majority.

He garnered 8,900 votes against 900 votes obtained by his opponent who was a well-known politician.

After two and half successful years in parliament, the government of Dr Busia was overthrown in a coup d’état staged by Colonel Ignatius Kutu Acheampong in 1972.

The new military government arrested parliamentarians and sent them to prison for one year. Nana Genfi II called it quits on his political career after he returned from prison.

Beyond entrepreneurship and political life, Nana Genfi II held various positions including National President of the Ghana Hoteliers Association, National Patron Society for Blind Ghana, and Chairman of the Ghana Legion (VAG) Ashanti among others.

With his hobby being poetry, Nana Genfi II published his first book “Poems for Leisure” in 1980 and received an America Certificate of Copyright Registration for his book in 1985.

He adopted the Sada-Parastish Religion during his active service in India and held the tenet of the religion; honesty in practice throughout his life.

His years and experience saw him travel to over 40 countries across the world.

The Hotel Life magazine, one of the many that published about Nana Kofi Genfi II in a 1994 edition wrote “Life is war’ so they say. Some are born at a time the war is already won, others live to see the war won for them.

There are those who went to the war front. Kofi Genfi II was at the war front. He started life in a humble way as a victim of stresses, prejudices and circumstances of his early years, yet he did not lose hope. Paradoxically, it was rather out of the wretched situation in which he found himself that he plucked courage, struggled hard and conquered.

“Kofi Genfi II rose from the wretches of as a commoner, through the roughs and hazards of a soldier; the bureaucratic of a civil servant; the hectic life of a contractor; the uneasy life of a member of parliament; a human; man of many parts; and about all, one of the leading personalities that grace the hotel business in this country. Such is the success story of Kofi Genfi II.”

Today, January 25, 2023, marked twenty years since this illustrious son of the land transitioned into eternity. It is believed that his family will mark the occasion in Kumasi.