The inside story of why Joseph Paintsil, Schlupp were excluded from Ghana’s 2022 World Cup squad 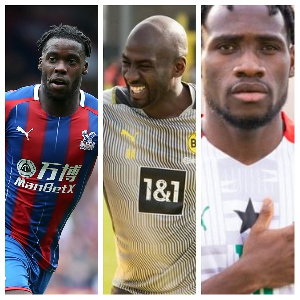 The major controversy surrounding the 26-man squad announced by coach Otto Addo for the 2022 World Cup on Monday, November 14, 2022, is the exclusion of Joseph Paintsil and Jeffery Schlupp.

When quizzed by journalists on why he omitted two of Ghana’s most in-form players from the squad, Otto Addo offered a rather evasive response which did little to let Ghanaians know why the Genk winger and Crystal Palace midfielder will not play a part in Ghana’s campaign at the World Cup.

He added, “we had a talk between us and they know the reason so I don’t want to go inside that but you know my principles and you have to abide by it.”

With Joseph Paintsil polling 6 goals and 6 assists in 14 games in the Belgian league and Schlupp managing 14 games in the Premier League, coach Otto Addo’s decision to drop them from the squad is strange considering the others who were picked ahead of them.

GhanaWeb thus decided to dig into the possible non-footballing reasons for their exclusion and it birthed some interesting answers.

GhanaWeb uncovered during its query that the decision not to include the duo in the squad was taken months before the provisional World Cup was released.

The winger and his entourage might have seen this coming after he was left out of the Ghana squad for the friendly games against Brazil and Nicaragua in September.

When explaining why he denied Paintsil a place in the squad, Otto Addo said “Joseph [Painstil] is doing very well. It would have been good for him to play the Japan and Chile games to show more of himself but he had problems and decided to leave the team,” he noted.

“Also, he wanted to start with his team [Genk], this one I can I understand. Surely I can just judge what I see.

Information reaching GhanaWeb indicates that Joseph Paintsil who was initially part of the squad for the AFCON qualifiers against Madagascar and Central African Republic and the Kirin Cup pulled out of the Kirin Cup to focus on his club career.

Reports show that Joseph Paintsil through a letter from his club sought permission from Otto Addo to return to the club and continue his journey to full fitness as he was returning from an injury and use the pre-season games to stake a claim for regular football.

Otto Addo granted him the permission but was surprised to learn that instead of being with his club for pre-season, the winger was rather in Ghana. A video of Joseph Paintsil playing football with colleagues in Ghana made its way to Otto Addo and the coach is reported to have been livid and disappointed with that development.

According to our sources, that was when Joseph Painstsil’s World Cup dream ended as Otto Addo believed that he was not honest with him.

However, a source close to the player explains that Paintsil was in the country for a charity project and not on vacation.

As published by GhanaWeb on June 15, 2022, Paintsil only made a donation to his boyhood club Fadama Ajax and the said video was from a charity event.

Osei Kwaku Palmer, a rival of Kurt Okraku for the GFA president position continues to allege that Paintsil who is a product of Tema Youth was dropped due to his association with the club.

GhanaWeb’s findings indicate that there is no merit in these allegations as the decision to drop Paintsil was the sole move by Otto Addo.

After more than a year out, Jeffery Schlupp returned to the Ghana team, earning a place in the 55-man provisional for the World Cup.

GhanaWeb sources, however, show that the inclusion of the Crystal Palace man in the 55-man squad was a mere formality as Otto Addo had already cast the die on him.

GhanaWeb is informed that Otto Addo removed Schlupp from his plans after the midfielder failed to honor the invitation for the games against Brazil and Nicaragua despite multiple meetings with Otto Addo and members of the technical team.

In these meetings, Otto Addo is reported to have exhaustively explained to Schlupp why he will need in his team and wanted to try the said tactical approach against Brazil but Schlupp turned down the call-up.

Meanwhile, Schlupp’s camp vehemently denies the information, arguing that the only time the player was officially handed an invitation was after the Brazil-Nicaragua friendlies.

They explain that the player who had given up on playing for Ghana, reversed his decision after Otto Addo personally spoke to him and assured him that the reasons for which he did not want to play for Ghana any longer will be addressed and that he will be getting starting spots in his preferred position.

They were, however, shocked when Otto Addo called to tell the player that he will be left out of the squad because there are others in his position who are better than him.