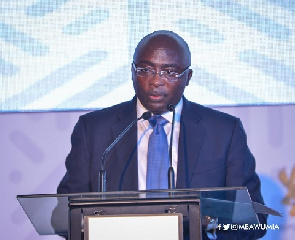 “I am a freight forwarder and therefore know how crucial this new policy is. Our trade volumes will increase because people will stop using the Lome and Abidijan Ports for instance, and once, more importers come in, there will be more revenue for Government and more jobs.

Speaking in an interview with the Ghana News Agency on the impact of the duties in Accra on Thursday, Mr. Amfo-Sefah, who is popularly called Nana Boakye, said the sanctioned reduction in Port charges by almost 50 per cent was proof that Dr. Bawumia and the Economic Management Team that he chaired were thinking like geniuses.

“But most importantly, local importers in Ghana, can now do better business that does not cost them too much by way of imports,” Nana Boakye said.

His comments were partially responding to a bold policy that the Akufo-Addo Government has started implementing to reduce charges at the Ports by a whopping 50 per cent.

At a Town Hall meeting held by the Economic Management Team, Vice President Bawumia received a standing ovation when he announced the new duty regime.
According to Dr. Bawumia, the reduction was to be effected by way of decreasing the number of charges, including; physical handling and processing fees, with a benchmark delivery value of imported containers slashed by a whopping 50 per cent.

Reduction for imported vehicles, on the other hand is to be 30 per cent. And the Policy implementation starts this week.

“This is what we call real action on the ground. This is what the NPP means when it says better, competent Governance. Not the empty long talks we saw under the NDC which could not tackle this important Port issue in the whole of the eight years they were in power.

“What NDC could not do in 8 years, NPP has done in two years,” Nana Boakye said.

He thanked Dr. Bawumia and the Economic Team for their wisdom, saying the tangible results would never escape the sense of appreciation of Ghanaians in 2020.

Cabinet crafted the policy, after a critical assessment of Ghana’s port charges regime, which is among the highest in West Africa.

According to Dr. Bawumia, the policy was arrived at, after a Ports Review Committee that Government had set up, discovered that Port duties were going up because of unnecessary charges and fees that have found their way into the system.

Per the Committee’s findings, the total charges and marine fees for container handling at Tema far exceeds those of Ghana’s key competitors, except Nigeria. The charges at the Tema Port are three times higher than what pertains in Lome and two times higher than what pertains in Abidjan.
“No port in Africa is charging maritime security fees of nearly $20,000” Dr Bawumia lamented.

Other unnecessary charges, he said, included Import handling charges which resulted from the physical examination of nearly 90 per cent containers at the Tema Port. In other jurisdictions, only 5 per cent of imports were subjected to physical examination, and at a fee.

According to the Vice President, what even made the physical examination a non starter was that, it only added 0.3 per cent to the revenue that Government got from the Ports.