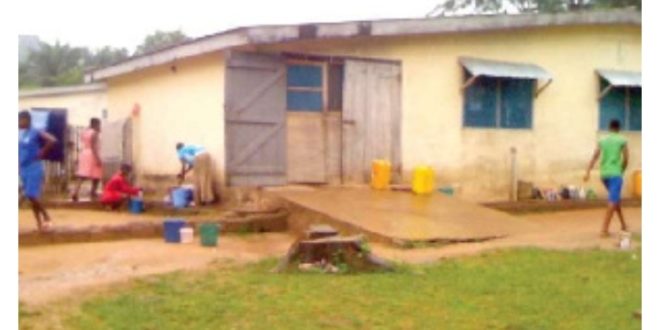 Share
The Ghana Education Service (GES) has justified the decision for teachers to pay 10 per cent of their salaries to occupy government bungalows.

According to the GES, the letter from Western Regional Education Director was purely based on the Ministry of Finance’s circular which the GES fully endorse.

“Management of GES has taken note of the concerns raised by GNAT on behalf of the pre-tertiary education unions on this issue and will be meeting the leadership of the unions to discuss their concerns in the coming days.

“Management of GES fully endorses the letter issued by its Western Regional Director and wishes to request all cost centre managers to be guided by the said Ministry of Finance’s circular on the issue of rent on staff occupying Government bungalows so long as that circular is valid and enforceable.  This is necessary to avoid future queries and subsequent appearance before the Public Accounts Committee of Parliament on the subject,” the GES explained in a statement dated 16th March 2022.

The GES continued that “Management of GES wishes to reiterate that it is not the GES which is imposing the rent or determining how much is to be paid but purely being guided by the Ministry of Finance’s circular and the admonitions of the Public Accounts Committee of Parliament.”

However, the Ghana National Association of Teachers (GNAT) has described the move as unfortunate.

Speaking to Francis Abban on the Morning Starr, the General Secretary of GNAT, Thomas T. Musah said the directive goes contrary to terms agreed on since 2009 regarding accommodation of teachers and other staff in schools.

“I think it is really disturbing and unfortunate that the Regional Director can take it upon herself to issue this statement without checking the facts since 2009. The presumption is that nothing has changed for that matter whether this can be implemented or must be done? For the avoidance of doubt we want to let her know that she got it wrong, she misfired and she goofed big time and she must check the records and come back again,” Mr. Musah stated.

Attached is the full statement from GES: