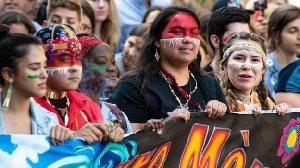 Tanzania summoned Canada’s envoy to protest after an aircraft set to be delivered to state-owned Air Tanzania was impounded in a land compensation dispute, the East African country’s government said on Saturday.

The case relates to a lawsuit filed by a retired Tanzanian farmer who has claimed compensation over what he says was the expropriation of his land several decades ago.

Foreign affairs minister Palamagamba Kabudi said the new aircraft, a DHC Dash 8-400 turboprop, was impounded in Canada this week after an individual filed a claim in court against the Tanzanian government.

“I summoned Canada’s high commissioner yesterday and told her unequivocally … that the Tanzanian government has been disappointed and angered by the move,” Tanzania’s foreign affairs minister Palamagamba Kabudi said at a swearing-in ceremony in the capital Dodoma for the country’s new ambassadors.

The minister said Tanzania had hired lawyers in Canada to defend it against the action, noting it was from the same individual who filed a lawsuit in a South African court claiming he was owed compensation by the government.

South African authorities in August impounded an Airbus 220-300 leased by Air Tanzania, though a court later ordered the release of the aircraft. The retired farmer’s lawyers in that action said he had asked not to be named.

Under President John Magufuli, who took office in 2015, Tanzania has spent hundreds of millions of dollars purchasing at least nine new planes for the loss-making state carrier since 2016.

Air Tanzania has previously had planes targeted in legal actions. In 2017, Canadian construction firm Stirling Civil Engineering Ltd seized one of its new Q400 turboprop planes in Canada over a $38 million lawsuit, before it had been delivered.

The Q400 was released in March 2018 after President John Magufuli sent his prime minister and attorney general to Canada to negotiate its release.

No details were given at the time, but aviation sources said the government had reached a financial settlement to secure the aircraft.

Previous 100 years ago, John Hartfield was hanged, shot, roasted for dating a white lady and his body parts shared to spectators
Next Funny Face, Caroline and Serwaa Amihere commend Pepsodent for transforming lives